I've been back a little bit and had a rough couple weeks, but I need to get my BitS reports up! This year's Blood in the Sun 2012 tournament was fantastic. I may not have placed as high as last year, but I still did well and had a good time along the way.

This year I brought a different list than last year, and the style of play was very different. Instead of a large Furnace horde and pushing it forward looking for the best match ups, I brought swarms of Gutter Runners and played the defensive shooting and magic battle. 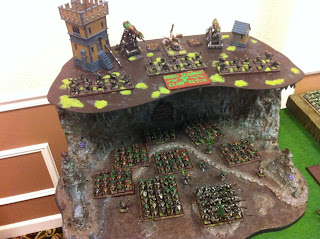 Dave Witek of Garagehammer! Dave beat up on me at Adepticon after hours with his Vampires pretty bad, and I grudged him for BitS for revenge. Dave brought an interesting list led by a Lord on a Coven Throne. 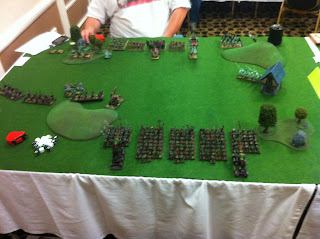 I did my very best to shoot the Throne off the table early, but after hitting every possible turn he passed all of his ward saves the first 3 turns or so. My Gutters clogged up the left flank and shot down the bats and Crypt Horrors for 3 turns until the Abomination got into the Horrors to finish them off. As things were getting physical in the middle with my Slaves holding off the Throne, I charged and combat ressed down the Black Knights AND Ethereal Cavalry. BUT, those 4 units were the only things I killed.

Even after finally blowing up the Throne, the Vampire survived and hopped into a Zombie unit. I got that unit down to 3 final zombies on the last turn and couldn't finish them off, after a triple unit charge to try and finish them. He picked off one of my Slave units and got one of my Grey Seers after a poor tactical decision left him in the open to bring the game closer. In the end I pulled of the 11-9 win but should have been more. 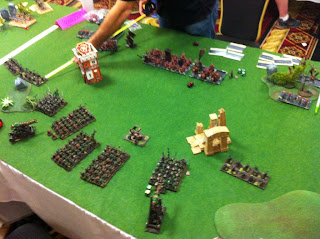 Game 2 was against @Lordbaerion / Ryan Nicol, the winner of Waaaghpaca 2012 with his mono Khone Daemons of Chaos army. I was feeling pretty confident in this matchup because Skaven have the nasty toys to deal with Daemons, Ryan didn't have a Bloodthirster (he had a Daemon Prince), and I stole the roll for the first turn. I basically danced around his Flesh Hounds on my flanks for the first few turns and shot them down with Gutter Runners, as they failed charge after charge with my Gutter Runners at max range to fire everything all the time.

The game really turned into a win to me early turn 2, when I had the perfect storm (of magic). I had 8 power dice to Ryan's 4 dice. 4 dice to cast Plague on the Bloodletter Horde, and Ryan used 4 dice and failed. With no dice left and no dispel scroll I have magic superiority. Then I cast 13th Spell on 4 dice with 2 Warpstone and got it off. THEN I cast 13th AGAIN on 3 Warpstone tokens with the Power Scroll from my second Seer. This full wiped out the Bloodletter horde and crushed Ryan's lines. He was able to get some more points with his characters by the end but I got the 17-3 victory. 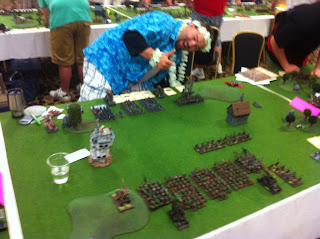 Waaagh! Cast's Joe Flesch in a Skaven-off for game 3. This turned out to be a battle of filthy lists, but my list had the perfect build to take on Joe's. My Gutter Runners were primed to take out his Plague Furnace as well as Joe's Gutters right from the start, and with larger units I need they would be successful over Joe's 2 units of 6 or so. To me this was the difference (mostly). I was able to take out his weapon teams and his Furnace in a couple turns.

By turn 3, the magic had tipped in my favor as well. Joe cast a Plague on my General's bunker early, and did maybe 10 wounds out of 30 and then stopped. Next phase, I Plagued Joe's Stormvermin and killed half the unit, bounced to the Slaves and killed half the unit, and bounced to the next unit of Slaves and killed another half. In the end I got about 70 models or so! My Hellpit Abomination also rear charged Joe's and crushed it. From there on I was able to clear up everything and get the big 20-0 win.

Miel Vermulen and his tough Empire were my task in game 4. Again I stole the first turn, much to Miel's chagrin. Especially with Meeting Engagement deployment there was a LOT of room behind his lines even though he did his best to deny me deployment with Scouts. First turn a Doomrocket and Plague bomb took out his huge horde of 50 Halberdiers which was the focal point of his combat-centric Empire. I was able to take out his Hellblaster and put wounds on his Cannon as well. 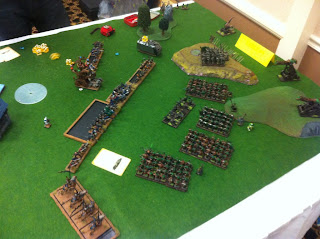 Miel then snuck his Steamtank (if you can sneak a stank anywhere) up the flank and sniped at my General AND BSB with his cannon on it, as they were outside units to defend against Dweller's. The BSB got killed, and it panicked the General off the board first turn! After the amount of devastation on my end first turn, this development really turned things back. As Miel was still crippled though, I was able to use my remaining toys and really pound out the points, with the Abomination and 13th Spell really getting a lot of points on the last turn finishing off the Halberdier bunker and Wizard Lord in the last turn for the 16-4 win.

I figured I couldn't make it all the way through BitS without facing off against Dark Elves or Ogres, and I ended up playing against one of the best Dark Elf generals I have ever faced again. Adam Hilton from the Indiana crew (with Jollyboy) either won Ard Boys or got 2nd the year that I got third at the Chicago National Finals. He got me in game 4 of Adepticon, and here we were again game 5 of BitS. 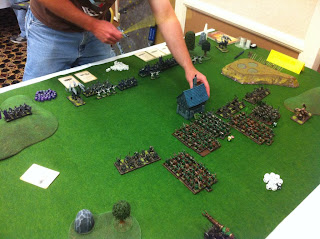 Things started off well when I got the firs turn again and was able to do some wounds to the Harpy chaff I was worried about, and actually killing his Pegasus hero with a WLC which I was sure had the Ring of Hotek. But then he started passing initiative tests on Hydras, and I rolled 1 for wounds on the other, and after both the Hydras got into my lines things started to fall apart. In the end I couldn't turn it around and I fell short, losing 17-3 in my final big to get a few more rankings points.


The final results had me pretty satisfied though, as they handed out Best in Race choices this year! 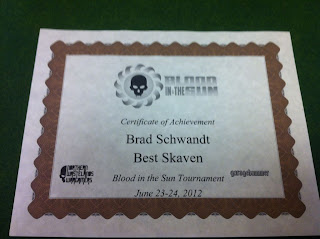 4-1 is still pretty solid finally finishing in 15th place, and I am getting a better grasp on the army vs the tougher match ups. This is my second time taking this type of list (first time was MWR) and I am looking forward to Buckeye Battles next weekend with the exact same list I took to BitS.


In other news, I am thinking about changing the blog format to "Rhellion 365"!!! This means I will hopefully be playing at least 1 game for every day of the year, through casual games, tournaments, grand tournaments, and probably a lot of Universal Battle match ups online.

Keep an eye out on the blog for launch announcement, which should be on my birthday this year: August 4th.
Posted by Rhellion at 9:38 AM