Today's game was one I played with Andrea as we both tried out a few ideas for Screw City GT. I had wanted to get a few games in with the Screaming Bell in a Storm Vermin horde for a while, and have been thinking about bringing it to the tournament. My rare choices have also been up in the air for the list, so I tried out 2 WLC's with 1 Abom and 1 Doomwheel. We set up and played a battle line, as we do for most practice games... 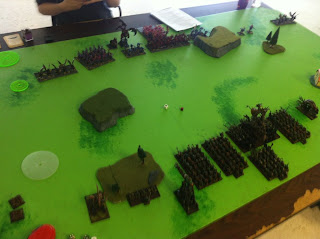 The Bloodletters set up directly across from the Bell worried me immensely, only because the Seer can be Killing Blow'd off of the top by the infantry models. I won first turn and marched the Bell forward though, trying to soften up the 'letters.

On the second turn I made a stupid risk in the name of fun and seeing how it worked by charging head long into the Bloodletters. This amazingly was followed up by rolling a 13 on the Ringing of the Bell chart, which allows every model in the Bell unit to attack. Andrea then stopped the Death Frenzy I tried to cast on the unit, that would have given me 120 attacks! Still, the mass of attacks crushed the Bloodletter unit, and my Grey Seer managed to avoid all harm with his defense and war save, saving 2 killing blow wounds with his 4+ ward. 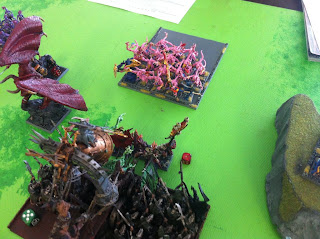 The Bloodthirster in this game was actually being proxied as a Great Unclean One. The next turn he charged into the flank, but I finished off the Bloodletters and BSB Herald, and reformed into the GUO. My next turn I rolled a 15 on 3d6 to also rear charge the GUO and spell the end for the Daemons. 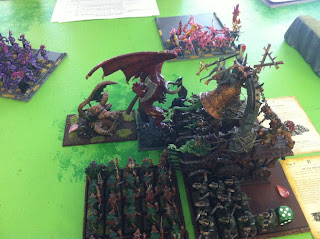 I am intrigued by the Bell, and really think I am going to take it to Screwcity GT. I definitely want to play it against some other armies, and hopefully against some artillery to see how long it'll last.