I've fallen to the #new40K bug! I dropped my 40K armies about 6-12 months ago, and gave up on the game. There is something about a new edition that gets me going, so I wanted to give new 40K a shot. At my local Games Workshop Hobby Center in Rochester Hills, MI I got wrangled into a demo game, where I played Orks vs Space Marines. We rolled up one of the new scenarios, and we played Relic where the objective was to grab a token (the relic) and hold it at the end of the game. 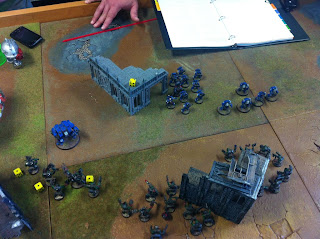 There are also Secondary objectives in the base scenarios, which I think is a fantastic idea. To be honest though, the seem VERY Malifaux-ish, which is not a bad thing. The Relic scenario reminds me of Treasure Hunt, and I think there is a Break Through secondary objective.

My Orks spent the first 2 turns moving forward, trying to gain ground on the center of the table, and get the Dread on my flank. I was able to destroy it with power claws to get the first kill of the game and a secondary objective called First Blood. 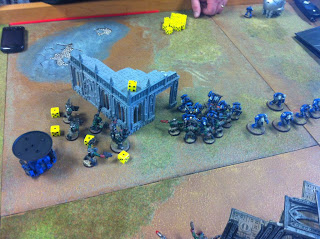 From there I grabbed the objective with one squad of Orks as the other moved to intercept the Space Marines as my Nobs moved to reinforce. I wiped out the center Marines, but didn't quite expect what happened next. The Terminators that were the only remaining models on the board killed EVERYTHING in the center. Then, they started to move after my Orks with the objective. 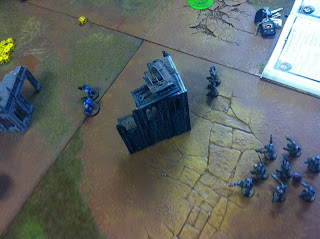 The made it to them at the end of turn 5 and finished my Orks and I dropped the objectives, but the game ended when I was wiped out and the Marines did not get to pick it up! In the demo the GW staffer said that if you get wiped you do not automatically lose even though the game is over, and you count points as normal. So we tallied up and because I got First Blood, the game ended in a draw. I've since found the rule reference that states if you do not have any models on the table at the end of a turn, you lose.

It was a lot of fun playing the new edition with new rules like Snap Fire and crazy changes (for the better but takes longer) to Wound Allocation. I definitely see myself getting some more games in with the Necrons I picked up while I was at the store!