Today's game was the second game at Gamers Sanctuary's July 2500 point tournament. I was running the Daemon list I posted in yesterday's game and I was lined up against Tom's Dwarfs with loads of warmachines and we were playing Battle for the Pass! 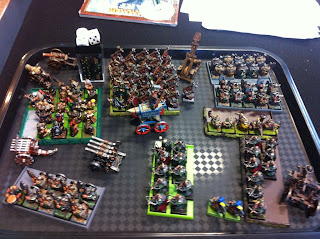 There wasn't a lot of "meat" to his list, but I would have to weather a LOT of fire as I came across the table the loong way for Battle of the Pass.


To start, Tom picked the side without the building, which I though was a mistake. This allowed me to hide Kairos in case I did not roll for the first turn, which I did not. It also meant I would get an extra round of shots to take a part my also very small list. The Dwarfs opened up and took out 11 Daemonettes, and a cannon killed my Fiend on the right. Gridge throwers again launched and took out a rank of 10 Bloodletters, and the Anvil hit the Daemonettes and halved their movement. I was unable to get any effective magic as I marched forward and only took off a couple of Crossbows, and I had to bring Kairos out into the open to be able to effect the battle the next turns. 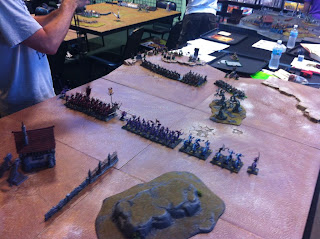 With Kairos in the open, turn 2 the artillery turned his way but he effortlessly deflected the two cannonballs aimed at his face. The Big Bird lost concentration on his first small spell, but that still left me with 6 dice and my Herald of Tzeentch in range of the Anvil, and I rolled double 6's to Dweller's the Runelord off the table. The Masque and the Bloodletters were within range of the right unit of Quarrelers to lower their leadership by 4, and that was enough for the Flamers who charged into their flank to break them and run them down to give me some solid board control early turn 2.

Turn three things started looking grim for the Dwarfs, so they turned all of their sights on Kairos and unleashed the fury. The only problem was that he passed 12/12 ward saves vs an Organ Gun, 2 Grudge Throwers, and 2 Canons! I didn't even have to use Kairos's reroll to keep him alive and as the dust cleared he was still at full wounds.

On my turn, I declared a charge from the Fiend against the huge Quareller unit, trying to draw out the stand and shoot reaction before putting my now very weak Bloodletters in. He held, so then the Daemonettes declared a huge charge they needed an 11 to make hoping to draw it out and it worked. They only killed 1 Daemonette at the long range, and then I charged the Bloodletters in without risk of losing some of the few models I had left. Then, amazingly, I rolled box cars for the Daemonettes to get into the combat and now had all 3 units fighting in a line against the remaining Quarrelers and also Hammerers who the Daemonettes got a double charge against because they were in a perfect line.

With the Leadership debuff and the huge combat resolution from the huge combat, I was able to break and run off the Quarellers and position my Bloodletters to be ready to take out all the war machines. The stubborn Hammerers held for another fight but at this point the game was coming to a close and Tom conceded the defeat.

The Dwellers on the Anvil, the amazing ward saves on Kairos, and the box car charge really turned the game in my favor. I'll be back tomorrow for game 3 and the tournament wrap up.