Breaking back into Malifaux

I have been meaning to start playing more Malifaux, and wanting to have games and hobby work for the blog every day is an excellent excuse to get in some small/shorter skirmish games. Our local group at Pandemonium has been wanting to restart their Malifaux Mondays again, so I hit up the store this past week to play with my Guild. 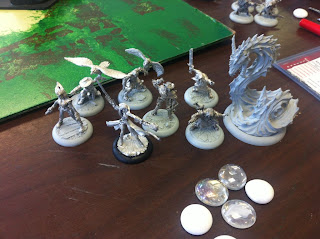 I was up against some Gremlins, and we flipped Shared Claim Jump for our Strategy. I picked Sonnia Criid because I had been wanting to play her Avatar for a while, and decided on Kill Protoge on one of the named Gremlins, and Hold Out as my Schemes. I figured if the Gremlins would be in the middle of the board trying to control the objective for Claim Jump, they wouldn't be in my deployment zone for Hold Out. 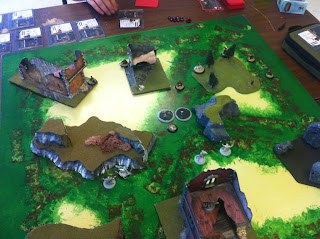 The objective of Claim Jump is to end the game with more models within 3" of the center of the board than your opponent, so I advanced on the marked while also trying to keep my distance from the crazed exploding Gremlin. I was able to use Austringers who ignore line of sight with their hawks to soften them up, and my Miss Demeanor triggered a Faster Than You with a red joker to blast apart one little runt. I also tried to use Sonnia to place flame walls and block the Gremlin advance up the middle. 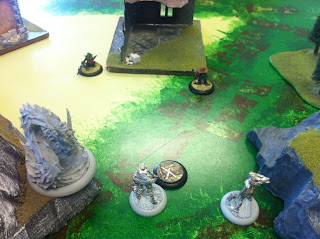 Sonnia moved forward and pulled off a massive blast that killed two gremlins to fulfill her second manifestation requirement, and she transformed into her Avatar for in the middle of a few Gremlins, which was good for applying burning tokens. Soon later though, Ophelia shot her between the eyes to put her down. Turning around Miss Demeanor aimed at Ophelia and triggered Trigger Happy to shoot a total of 5 attacks and kill the Gremlin leader in a hail of gunfire and secure the full victory.
Posted by Rhellion at 6:25 AM