Here we go, the kick off game of the 365. I decided to start at my local regular tournament, which is held at the Gamers Sanctuary in Flint, MI. The format is 2500 with no comp, so basically anything goes. I've been successful at this event with all kinds of different lists, and today since Andrea was playing her new High Elves I decided to really filth it up with a special character heavy Daemon list. I'm not going to lie and say this is anything other than 'Ard Boyz -ish in quality, but I plan on helping Andrea learn Kairos and also seeing him at the Screw City GT coming up in September.

Here is the list. Be careful, as you may need a shower afterwards: 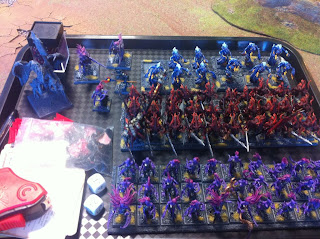 That's it. Two hordes, supported by Flamers, with the Masque and 2 Fiends running interference.

Game 1 of the event will be game 1/365, and it was against a solid looking Ogre list run by Bennet. 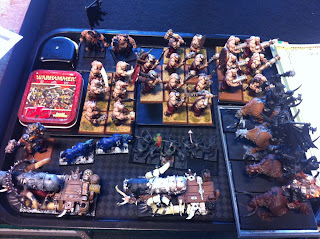 I was worried at first about the Ironblasters taking out Kairos, but I was able to deploy behind a building to start the game and then get the first turn due to scenario. My opponent made key mistakes in deploying his Gnoblars in front of his Ironblasters on the far left flank, and his Sabertusks around his Ironguts with his characters. I was hoping to cause some panic tests right away.

The scenario was Meeting Engagement, and I lost The Masque to reserves. My opponent lost his Bulls, Mournfang, AND his Leadbelchers. Would make for easier target choices first turn for me.

Turn 1, I moved forward and Kairos worked up some extra power dice with Boon of Tzeentch before casting Doom and Darkness on the Ironguts and characters. He didn't know he also had another -2 LD from my BSB within 12". I then was able to cast Mindrazor on the Daemonettes who were sitting right in front of the 'Guts.

On my opponent's first turn I used Siren Song on the Ironguts to get them into the Mindrazored Daemonettes right away. 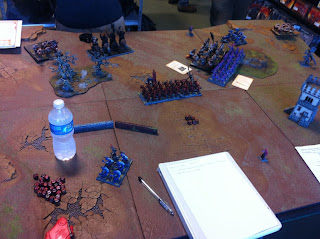 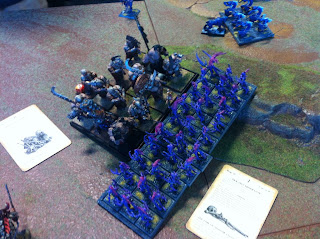 ASF and strength 7/8 kill a lot of Ironguts, and ay -5 Leadership the Ogres didn't have a chance and failed their needed snake eyes leadership. The Daemonettes ran down the Ironguts and all of his characters first turn, as the next threat loomed in the Mournfang who entered the game from reserve. 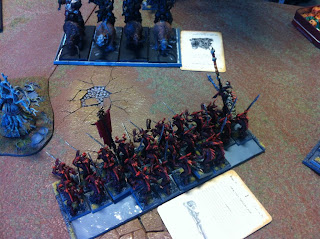 On the far flank I charged a single Fiend into some Gnoblars, and in the center Kairos cast Mindrazor on the Bloodletters who were sitting in front of the Mournfang daring them to charge. My Flamers were chopping away at Leadbelchers on the right flank as they came from reserves. The Daemonette was able to break the Gnoblars and run into the flank of the first Ironblaster, setting up a combat I didn't think I could win next turn, but protecting Kairos from a cannonball.

On the second Ogre turn the Mournfang balked and did not charge the Bloodletters. IMO the Impact hits and then breath may have really made the difference and he should have charged them, even against Mindrazor. The lone Fiend actually was able to break and run down the Ironblaster on the left flank, also causing the Ironblaster next to him to panic and run towards the center of the board.

On the third turn I got into the Mournfang and cast an irresistable Mindrazor on the Bloodletters. The Mournfang were not long for the world and were broken from combat with the help of -5 Leadership (banner and The Masque) after losing all but 1 wound remaining in the unit. 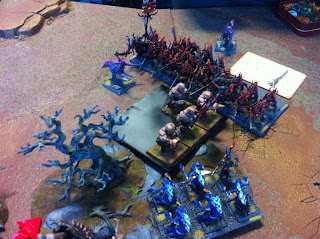 The Daemons then were able to swing around and finish off the Ogres for the max point win and to go 1-0 at the event.


Now I'm not sure I can do every single day with the amount of detail I put up for this battle. Of course I would like to, but doing them (hopefully) every day may not allow me to. Come back tomorrow for round 2 of the tournament, as I face off against Dwarfs! All the war machines available to the short and bearded ones pointed right at Kairos!