I woke up Sunday morning and joked with Andrew Sherman of the Ohiohammer podcast that we were close on points, which meant we would probably face off. He checked the score and was sure he would escape me, but we ended up matched up after all when pairings were announced! Andrew was originally set up to play Chaos Dwarfs I think, but switched to Empire because of his love for the army and the new book being out. Here is what he brought: 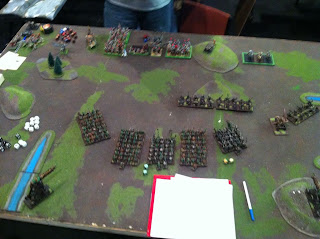 I started by deploying my Scouts and then stealing the first turn roll without the +1, and was able to start taking out threats. I took out a Great Cannon and wounded another twice, just failing to totally eliminate them. A WLC took out 1 Demi Gryphon as well. On the first Empire turn, the Steam Tank immediately misfired and took a wound. The cannon then tried to fire, and misfired again... leaving the Steam Tank with no cannon after it exploded. In combat, the Arch Lechtor failed to break the Gutter Runners who were stubborn in the forest, and the Demi Gryphons charged the Hellpit. The Hellpit held through the charging lances and took a wound. 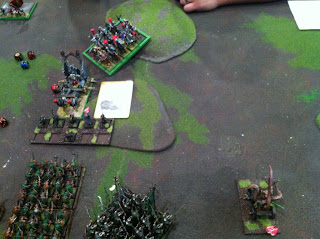 On the second turn the Gutter Runners defeated the War Altar but it held Stubborn. The Hellpit Abomination finished off the last of the Demi Gryphons. On his turn, Andrew's Steam Tank misfired AGAIN. I used my magic defense against some high bound spell rolls and shut down his spells again. My level 4 vs his level 2 and bound spells was proving to be a losing battle for the Empire. 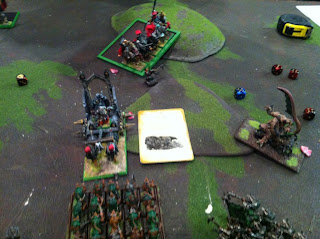 I positioned my Warlock so they could not charged the Hellpit and would have to close the door out of position away from him. The next turn I charged the Slaves and Hellpit into the STank, and all the Slaves into the Halberd bunker next to that, hoping I would have a chance to kill the War Altar with the Abomination, and overrun into the second combat. 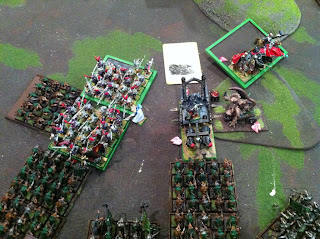 At this point I realized my mistake, as the characters from the Inner Circle Knights all scattered out of their unit and ran away to preserve their points. I should have charged the Abomination into them and would have crushed them. As it stood, I did not kill the War Altar until the very end of the game and lost a load of possible points for choosing to go after the wrong unit... as all of his characters (besides the General) survived.

To cap it all off though, Andy did misfire 2 more times on the 4th and 5th turn, so he ended up misfiring once for every turn we played. This ended up earning him the Misfire Award for the whole tournament! I scored a moderate victory with bonus points, and ended up near the bottom of the top few tables for round 5, where I would be playing a "Council of Light" High Elf list and loads of Banishment spam. That's up tomorrow!