I took a game break for today's post, to start assembling the Necron Battleforce I picked up after my 40K 6E demo last week. The older plastic Warriors have a load of annoying mold lines, but the models are pretty cool. Mold lines do take up a lot of time, but I was able to catch up on some 40K podcasts I haven't listened to in 6 months. 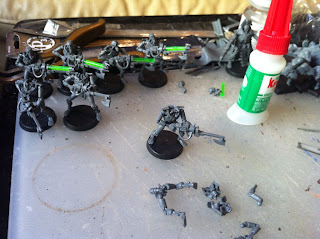 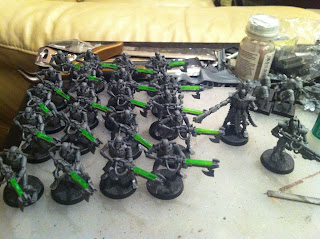 I have to say I am pretty impressed by the newer models I have put together so far (only the 1 sniper and Overlord, but they are awesome). The idea to start with this army as I build will be variety. The Necron model range is so awesome I don't see myself having much of a spam model list at all. It'll be more likely that I have 1 of each of a few units. I definitely know I want to get some Wraiths and a Flyer or two. 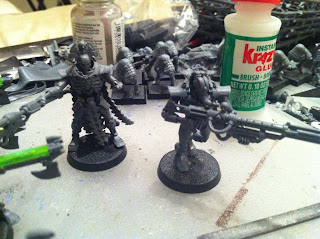 So far, this is the first army list that I have written for the Necrons. I already slightly changed it because I think I definitely want a Cryptek or two (shown). Any advice is appreciated. For me, balance is key... because I like the models and because I'm not sure spam is the way to go in 6th: