Facing off against Kairos

Recently, I hit up the local GW with Andrea's new High Elves to try and get a pick up game. I really wanted to use the Dragon model that came in her army, so I built up a choppy Lord on a Star Dragon list at 2500. My opponent was none other than Kairos Fateweaver himself, it seemed as the Chaos Gods though it fitting after the previous weekend's tournament! 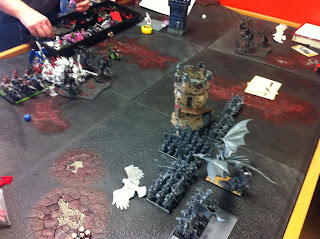 My list was pretty different than what I typicall see from High Elves:

What the Daemons brought:

I think that was it!

Things started off very well with deployment as we rolled up Blood and Glory, and I got both Mindrazor and Pit of Shades on a wizard along with Miasma on each. My 8 fort vs his 5. Break at 3. I set up eagles and archers, then deployed the rest of my army away from the giant unit of Horrors and their herald, as I was going to focus on getting banners and winning the game! I moved forward and set my sights on the Bloodcrushers and BSB in the middle. 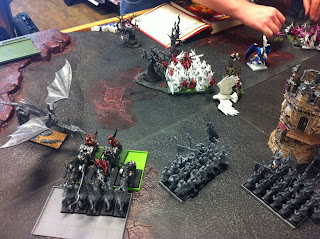 On the first turn, Kairos was out of range to do too much but he did pick off archers. I went second and set up my Dragon, Dragon Princes, and White Lions ready to receive the Crushers, and blocked up the chariot and Bloodletters with the Eagle. I rolled 12 total power dice first turn and got off BOTH Mind Razor and Pit, but one was scrolled and the other dispelled on dice.

Turn 2 made for the Crushers charging the Princes, who had to survive if I wanted any chance to get those Daemons. The Bloodcrushers not haviong a Herald to give them hatred was the difference, as they flubbed their rolls and only killed 3 models. I killed on back and lost by 1, but held. 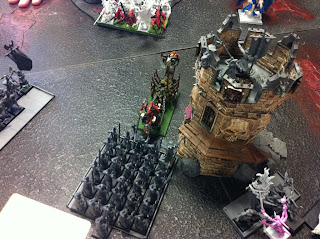 My turn I charged everything into the Bloodcrushers and also charged my Spearmen into the chariot, who had killed the Eagle and overrun in front of them (but didn't make it to them by an inch). I was hoping to get off Mindrazor but new I would at least have decent combat resolution. In the magic phase I ended up with 10 dice thanks to the banner and channel rolls, and got off Mind Razor on 6 dice without IF, and my opponent let it go! He was scared of Pit of Shades, which was aimed at Kairos last turn. With my remaining 4 dice I DID get off Pit, even with -2 to cast from the Standard of Sundering so I guess he played it the way he wanted.

The Mindrazor did the job, and all the attacks aimed at the BSB killed it, then crumbled the chariot on res. On the other side as expected, the Bloodcrushers wilted under the ASF great weapon attacks from all around and killed down to the standard and broke the Daemons Fortitude, on the bottom of turn 2. 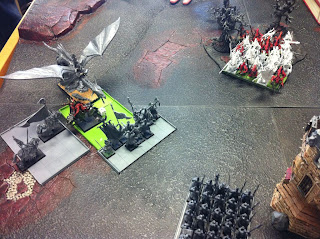 Solid game, and definitely as easy a win ONLY because of the scenario. I know having to deal with Kairos backed by 30 Bloodletters and 40 Horrors for 4 more turns would have been tough, but I played to the scenario correctly and went for the win by objectives and not trying to table my opponent!


See you next time when I try to get in some Malifaux action at another different local FLGS.
Posted by Rhellion at 8:03 AM