Today's game was the final game at the Gamers Sanctuary tournament, and I was matched up against Dwarfs and loads of artillery again, but the supporting list was different. My opponent Mike and I play often but normally with his Lizards, which he is very good with. This event was his first time ever playing Dwarfs, but he had done very well in his first two games destroying both opponents (also getting a little luck and sniping Teclis with a cannon first turn). Here was his list: 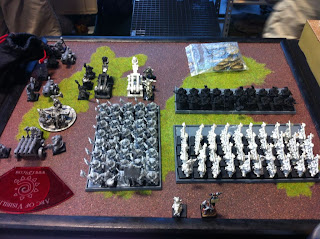 The final game was a regular Battleline, and the Dwarfs castled up in the corner away from the building on the table (a good choice) after I was able to pick the side with the building. I deployed  opposite, and kept Kairos in the open, risking the artillery. 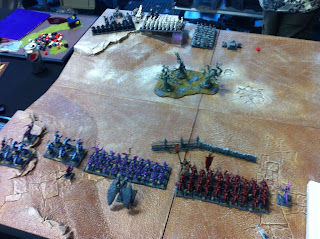 I lost the first turn again and the Dwarfs began their bombardment. The only thing I thought was peculiar was that Mike went after The Masque instead of Kairos. His reasoning was that he believed he could stop the magic with his very strong magic defense, and it would be a futile effort to get through the ward save and abilities of Big Bird. He was pretty well on the mark until a bit later...

He smashed up my blocks and took a rank off of each immediately, and as I moved forward I didn't have any effective magic and shot a few quarrelers. Sound familiar? 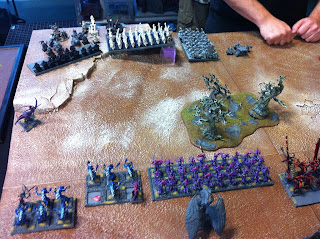 The second turn Mike went for it. The Grudge killed another 11 but seeing my Fiends coming on his flanks, threatening his Organ gun and castle, he decided to go for Ancient Power and wrath and ruin d3 units. Unfortunately for the Rune Lord, he failed his roll and then rolled a 1 on his chart to blow up the Anvil on turn 2. With his General off the board and after moving in range to block up the Hammerer horde and give it a leadership debuff, I knew my magic would be unrestricted. Kairos lost concentration but my Herald did it again, casting Dwellers on the Hammerers and panicking them off the board after losing 16 models.

Turn 3 the Daemonettes that moved up Sired Songed the Quarellers, then also received a flank charge from the large Warrior block. Since I was in horde formation he would luckily only get 3 chops on the unit. 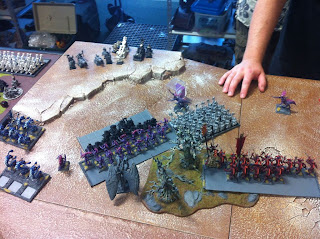 The original plan was to Mindrazor the Daemonettes and block the Hammerers, then Siren Song. But we would use what was in front of us. The Daemonettes made quick work of the Quarellers and won the combat, but the steadfast Warriors held as the Quarrelers ran. On my turn I chades the Quarrelers off the board with the Fiend, then got into his warmachines with the flamers and fiend, as the Warriors got charged on 2 extra sides. 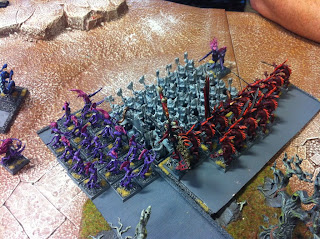 The Daemonettes received a needed Mindrazor from the unrestricted Kairos, and the Dwarfs were Enfeebled reducing their strength by 2. The Mindrazored daemons killed a ton, and with the rest the Dwarfs were run down as the rest of the warmachines began to fall and the game ended with Daemons controlling the board.

I ended up going 3-0 with almost max points (20-0 with 4/5 bonus all 3 games) and understand this was a really, really filthy list. I am hoping next month to be able to try out High Elves before I get back to the regular Skaven tournament schedule, but I also have Buckeye Battles coming up for plenty of Skaven tournament games.