The Family vs The Gremlins

Today is the first day of Buckeye Battles 2012, and I will be down in the Columbus area playing the Skaven in a 2400 point Fantasy tournament. But while I am away I still have a blog post! Today we have another quick Malifaux game against Gremlins, where I used the Ortegas to take on Ophelia again. For our Strategy we flipped shared Treasure Hunt, which meant there would be a token in the center of the board that we needed to pick up and bring back to our deployment zone. For schemes I chose Hold Out, because I wanted the Gremlins to come towards my fire superiority, as well as Bodyguard on Perdita. 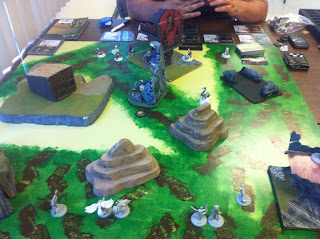 We both had explosive characters, especially with me running Papa Loco this game. Papa Loco is the crazed Ortega who fights with dynamite in both ranged and melee attacks, and explodes in a burst when he is killed. Early on I moved Papa Loco forward and the few Gremlins that tried to shoot him down flipped poorly, leaving him an opening to run into a crowd of 3. He flipped and cheated to the red joker to do a massive 12 damage melee strike and explosion to kill everything in the center of the board! 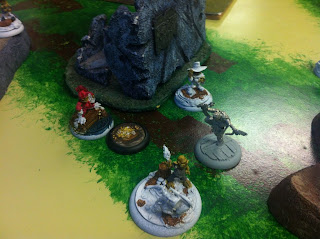 From there I started to really move towards the treasure with Perdita. Raphael to a shot at Perdita and cheated to hit her for 5 damage, a fairly hard shot. His second shot wasn't so lucky though as he missed and Perdita triggered Faster Than You to shoot back and kill him. She then picked up the treasure and started to run back to her deployment zone, as the Austringers held off Ophelia and the Guild got their treasure, and the win. 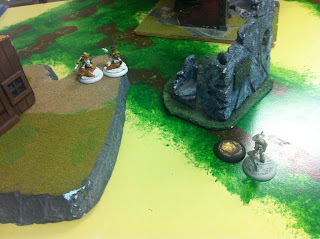