For the final game of Buckeye Battles, I was matched up against High Elves with loads and loads of magic. The idea with the "Coven of Light" HE list is loads of Lore of Light casters, and a caster who gets to pick his spells so that you can have 2 Pha's Protection spells and 2 Banishment spells... and Banishment would be at strength 7. Let's look at what Ken brought to the table. 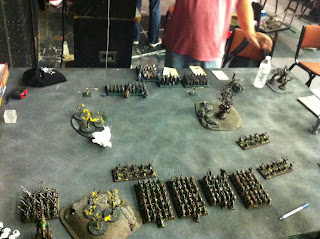 
The High Elves started off with the first turn, and an eagle and chariot tried to charge my first Gutter Runner unit. I stood and shot and then fled from the double charge. He showed his magic dominance early by Banishing the right WLC off the board easily... and then I quickly used my Dispel Scroll on the second one as it targeted the other WLC.

My first turn just about ended the game right after that scare. I cast Plague and 13th on the Seaguard and killed them all. Down to the man, leaving the 2 wizards deployed inside them standing alone at an angle in front of the General's unit. I had maneuvered my Gutter Runners and finished off the Eagles as well, but then I shot my cannon. The shot went through one of the front wizards, and into the general, who failed his look out sir, and then died. My remaining Gutter Runners on the left finished off the lone open wizard to kill all of his magic with the first shooting phase. 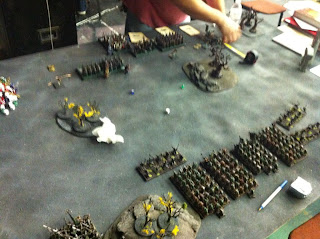 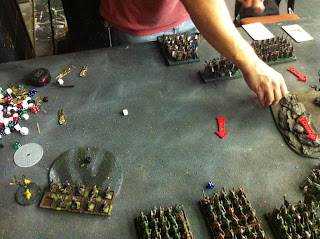 This devastated Ken's plans early, and surprised me... I'm not going to lie. I didn't expect that. On the second turn Ken starts to move his Swordmasters foreward and I cannon off the last Eagle and panic the Dragonprinces just about off the board (missed by 2"). Meanwhile the Hellpit rear charges the Lion chariot and wipes it out. 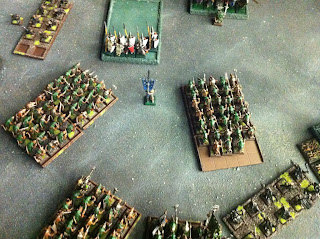 On the third turn it was desperation time as the Noble BSB tried charging out and get to the Grey Seer General, but failed. He then died to shooting fairly easily. The Swordmaster did get into the Hellpit and kill it, and I realized what a big mistake I made the previous turn trying to shoot my Doomrocket. It was stopped by Pha's Protection that was still up and wasted, when I could have just saved it for the next turn and greatly decreased if not wiped the Swordmasters.

The Swordmasters then overran into the Slaves and killed them, and into the Gutters behind them blocking the General's unit and killed them. While this was going on I was finishing off the rest of the High Elf army. 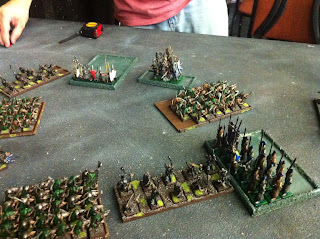 I used Plague and other magic to finish off the Swordmasters on the last turn to table my opponent, but I really feel that my mistake with the Doomrocket cost me. I ended up with 17 + 5 Battle points to finish the tournament... which got me 4th overall for Buckeye Battles 2012! If I hadn't screwed up I truly think I could have 20-0'd my opponent and tied for 3rd Overall with Brian Moyer and at least had a chance to podium with tie breakers. So close to making it, but honestly at the time I did not think I was that high in the placings.

In the end it was a great result, and my highest placing at a GT in my fledgeling GT "career". I will take 4th out of 96 in my 4th GT ever any day of the week.

Next up is Screw City GT in September! Until then I will be playing games, hobbying, and posting up blog posts. Keep an eye out.
Posted by Rhellion at 3:53 PM