I had a game at GW this week, playing as Daemons against High Elves. I had been playing a lot of Skaven so wanted a break from them, and knew Drew had High Elves so wouldn't want to double up the same army, so Billy and the Daemons came out to play. 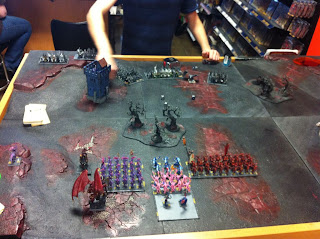 My Daemon list was basically a Bloodthirster, Daemonette and Bloodletter blocks with heralds, the BSB had the -2 LD banner, a small Horror unit with Heralds of Life and Shadow, a unit of Flamers, a Bloodcrusher Champion, and two Fiends. Drew's list had an Archmage with Life and the Book of Hoeth, White Lion and Phoenix Guard blocks, Spearmen, a few archer units, and Silver Helms.

Starting off right, Drew Dwellered my Daemonettes but my Herald survived. I wanted to get into combat quick to avoid getting Dwellered turn after turn. I moved up the middle fast and got charged by the White Lions early and lost combat. I missed my Daemonic Instability by 1, then rerolled boxcars (of course) to lose more. 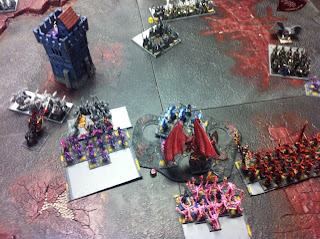 This put me down to 4 left in the unit before a Fiend and Billy the Bloodthirster charged into the flank, while also in the range of the BSB and the -2 LD banner. This was key as the White Lions failed their fear test, got beaten in combat, and then were run down and destroyed. A crushing blow to the High Elves who were almost ready to take control of the center if they defeated the Daemonettes. 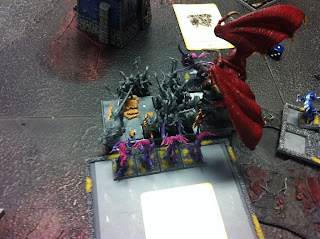 The High Elf magic superiority didn't do much after that as they Dwellered the Bloodletters, who were strength 5 but the only real viable target (I had the Heralds of Tzeentch outside of the Horrors). I then charged the Bloodthirster into the Archer block holding the Archmage and didn't even get to try to kill him, as they fled from Terror.

The Bloodletters and Phoenix Guard were in a standoff for a turn as Billy regained his facing, and then I charged in with both units to try and finish off the High Elves. 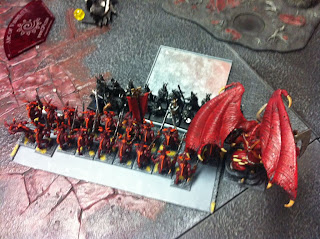 The combat was prolonged for a turn and then on his turn, Drew miscast and blew up a few PG, taking the Bloodthirster out of combat completely, and the PG killed off the last Bloodletters. They moved forward and attempted to retain points at the end of the game, but Billy turned around and charged them, challenged out the Prince and killed him, and ran down the broken Phoenix Guard to finish the game.

It was a solid game that really changed on the second turn when the White Lions were in range of the -2 LD banner and failed their Fear test. It did give me a better look at High Elves though, which I am hoping to take to next month's Gamers Sanctuary tournament. I have an interesting idea for a build that I think will work. We'll see.