Hordes of Beastmen vs Bell


Spending some quality gaming time this Saturday, I got a game against Beastmen for the first time in a while, and finally got around to playing Michael O. from Fresh Coast 40K. I was playing around with my Bell list again, and he brought hordes and hordes of Gor, along with a load of magic support and a few gribblies. 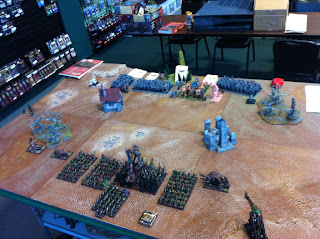 Early on I knew I had to start chipping away at one of the Gor blocks as I used my artillery to kill some Minotaur before they annihilated me and built up all kinds of attacks. I used Scorch a couple turns in a row to kill a Mino per turn as I detonated my Doomrocket in the General's Gor unit, killing about 13 of them, and panicking them nearly off the board on a rerollable 9 LD. 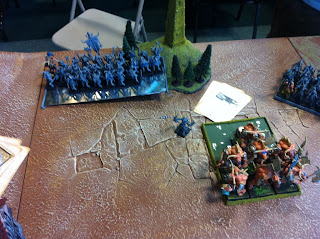 The was no stopping the minotaur who eventually got into the Slaves and past the Doomwheel who screaming into and through the Giant. The Mino's were held up until the Bell could get into their flank, as the Abominations lurched into the Ungor block and L4 Death mage on the left flank. Eventually BOTH Hellpits got into the same combat by avoiding Purple Sun as their initiatives were reduced to 1 for 2 consecutive turns. 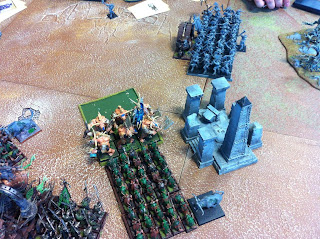 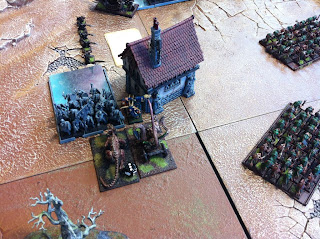 The Slaves were chopped down, but then the Bell unit finished off the minotaur in the flank. The big hit for my army was the next turn, with no Miasma up, a Purple Sun killed BOTH Abominations, haha. 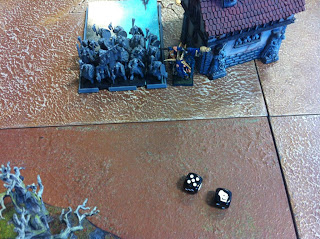 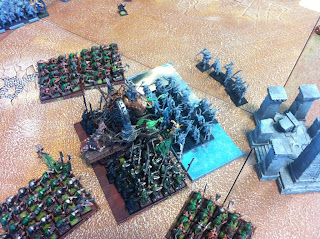 It didn't help the Beastmen that their General unit fled again, and this time off of the board. As the other BSB/Gor block charged forward, the Bell unit finished them off as well. In the end even losing both Abominations to a single spell was not enough for the Beastmen to turn it around.
Posted by Rhellion at 11:13 AM