Had my first game with Necrons this week, and I had a blast. I played with the 1000 points I have assembled against Tau. My list was an Overlord with warscythe and res orb, Destroyer Lord with warscythe and 2+, 10 Warriors with Ark, 10 Warriors, 3 Wraiths, and an Annihilation Barge. We rolled up a scenario with 5 objectives, which meant we had a little more room to move around with only 1000 points on the board, but we still ended up playing for 3 or so objectives. 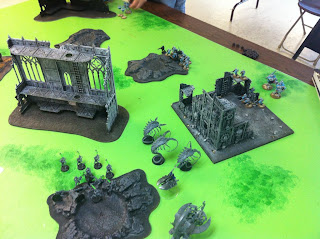 I planned on pushing forward with the wraiths and holding back with the Warriors, since I had 3 objectives on my side of the board. I had the Deathmarks deep striking, and held my Ghost Ark in reserve because I was supposed to go second, but then I stole the initiative. I had placed my objectives at the minimum distance on either side of the large building near my table side center hoping to capture both with the same unit... until we later read that a single unit cannot capture more than one objective!

The Wraiths ended up getting into the Fire Warriors in the ruins and wrecked them, but took wounds on the charge in from snap fire and in combat as well before getting run down for First Blood. We forgot about the Jink rules until the very end of the game, so my Annihilation Barge lost 2 hull points. My Deathmarks came down and nominated the non HQ unit of suits as their target and took one out, but couldn't finish them. 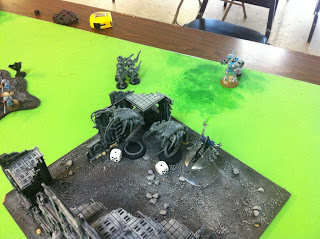 After this the Tau reinforcements came in and a huge Kroot and hound unit swarmed over the remaining Wraiths after my Destroyer Lord separated from the unit to finish the last suit. My Warriors in the middle of the board started positioning better in the building, but keeping out of sight for the time being. Without much to shoot at on my left where the rest of the Tau were, they were forced to move into the middle of the battle. As they moved forward I popped the Ghost Ark from behind the building with a squad inside, and moved the Warrior squad in the ruins into firing position, and unleashed the Gauss wave on the Hammerhead and dropped it fast with glancing hits and the Gauss rule. 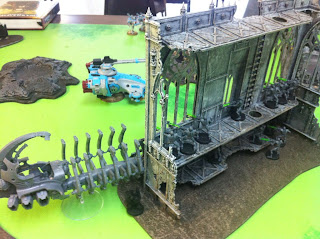 After this I was able to spread to the left objective and finish off the second Fire Warrior unit. The Kroot didn't move off my right flank because they were holding an objective, but the HQ suit unit jet packed over on the final turn to contest the objective and leave us in a tie. But, because there are secondary missions in this edition built right into the rule book, I won because I took First Blood and my Necron Destroyer Lord did not die (giving up the Overlord / General victory points) on the last turn.