The final game of day 1 and the strict Buckeye Battles banding system had me faced off against another Ogre player, this time from New York. Tim brought an interesting list that seemed to have many of the standard Ogre toys, but also had some Gnoblars, a Scraplauncher, and was using Heavens. He also took advantage of the comp rules and put Magic Resistance on his Slaughtermaster, so I knew I wouldn't be trying to Crack's Call that unit too much. Lets look at the list: 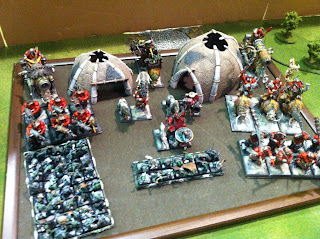 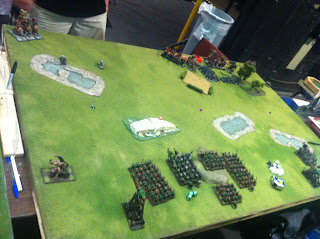 I would like to think I "won" deployment. I was unsure why, but Tim actually castled his Ogres in the opposite corner of my army. In the center of the board, I did have two impassable patches (the rock and the skulls... other skull patches on the board were not impassable) to funnel any Ogres into my units of Slaves. Maybe he was avoiding that. Also, there were three objective markers along the center line of the board we would be fighting for. 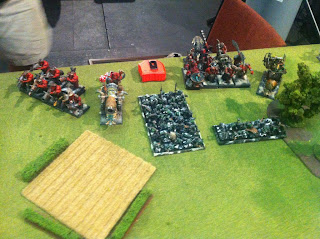 It did seem like he has the artillery advantage with 2 Ironblasters and a Scraplauncher, but I was happy to avoid combat with Ogres for as long as possible. The Ogres started by using their Forbidden Rod on the first turn, but I was able to stop all of his magic and leave 3 wounds on his Butcher. The first Ironblaster shot did kill my right WLC immediately, though. I started off with my Gutter Runners, killing all of the Sabertusks. 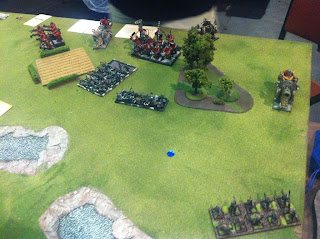 On the second turn, the Ironblaster got aggressive but failed its charge on the Gutter Runners, who put two wounds on it as they stood and shot. I was able to use my Scroll on Comet and shut down the Ogre magic again, and the mass of Leadbelchers needing 7's to hit still killed 3 Gutter Runners in the center, who passed their Panic check. The Ironblaster who didn't charge also misfired to stop it from shooting next turn. I screwed up my magic phase by rolling an 8 on 4 dice and failing to cast Plague, but my Gutters killed off the flanking Ironblaster while my remaining Warp Lightning Cannon killed 2 Mournfang and put 2 wounds on the third.

The Scrap Launcher then charged into the flank of the Gutter Runners who were in the woods while the last remaining Mournfang tried to do something and charged the Hellpit who came back onto the board from his first turn overrun. The Hellpit killed the Mournfang easily, but the Gutters lost yet stuck around due to being stubborn skirmishers in the woods. I started advancing forward toward objectives and crippled Ogres now, and Brass Orbed 4 Leadbelchers, killed the remaining Ironblaster with my WLC, and continued to hold up the Scraplauncher with stubborn Gutter Runners. 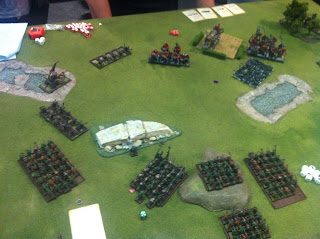 The Leadbelchers then turned and killed the lone Brass Orbing Warlock and a comet dropped to blow up the remaining WLC. The Scraplauncher finally kills off the Gutters who I had hoped could last, and looked like it may become a threat... until my turn when I killed off 19 Gnoblars with Plague and panicked the Gnoblars through the Scraplauncher who also fled. 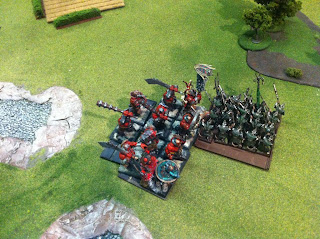 On the last Ogre turn, the Gnoblars fled off the board but the Scraplauncher rallied. As the Ironguts smashed into the flank of my Storm Vermin and crushed them to hold one objective, I moved the rest of my scoring units into position to easily hold the other two objectives and get a win with all the bonus points.

I really think the Ogres could have threatened a lot more with the 'Gutstar by being aggressive, rather than staying back and playing "Gunline Ogres". Against Skaven I have the magic and shooting superiority with a lot more multi wound targets in front of me (and the Ironblasters are on the opposite side of the board from my Hellpit and only have 36" range). Picking up the win put me right back into the thick of the pack, and would have me matched up the next morning against Andrew Sherman, the host of the Ohiohammer Podcast, and his Empire.

Back tomorrow with the report.