I have particularly enjoyed my re-emergence into Warhammer 40K because of the gaming club I joined that is focused on 40K. We had a club-only tournament that was excellently run and full of good sportsmanship. We are now running a 14 man Planetstrike League that has 5-7 full tables of Planetstrike going every Tuesday, filling the store with excellent terrain and great games.

Last night I played the most fun game I have ever played in 40K, and I lost. Space Marines attacking Eldar in the Desperate Assault mission for Planetstrike. It looked like I was tearing it up, but my forces were slowly whittled away, and I was unable to capture every objective on the last turn of the game well enough. On turn 5, I had a Land Speeder go full out to come into contact with the final Bastion's wreckage I needed to win. My Assault Squad intercepted the Warithguard that would have meant immenent doom for the Predator tank holding another objective. Then on the Eldar turn through all of the shooting, I failed ONE cover save on the Speeder, and it was immobilized (which means destroyed because it moved Flat Out), and then proceded to roll a 2 to see if the game went on. Epic!

I think what turned the game on me was when I was unable to kill a Wraithlord with 3 vehicles shooting at it (Land Raider, Dakka Predator, and double HB Land Speeder), so I assaulted it instead of the Fire Prism to destroy it. The Fire Prism then destroyed my Land Raider, leaving my Assault Terminators stranded. They eventually captured an objective, but I think that if they were in the main fight, rather than on the fringe, then they would have made the difference.

Thanks to the 40KFC my return to 40K has been a great hobby experience, all around.


I picked up a Forgeworld Ultramarines Venerable Dreadnought and a unit of 5 Scout Bikes this week, so more on them soon. 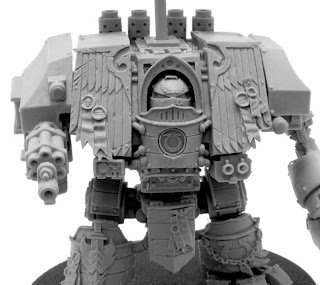