Globalsmack posted up some character creation rules over at his blog: 40K Armageddon!

Using the rules, I created THE special character for my army of 4th Company Ultramarines: Captain Idaeus. Here he is, please leave your feedback.

(Skills marked with a “*” are usable by any squad the character is attached to.)

Basically I used the Chapter Master HQ choice rather than the regular Captain because Idaeus is the Master of the Fleet, giving him access to the Orbital Bombardment. I did not upgrade any other stats because I did not think he should be better in combat stat-wise than Marneus Calgar, but I did upgrade him with Eternal Warrior and Furious Charge.

Basically he is the same point cost as Marneus Calgar, without the great abilities, but he gets Furious Charge (for him and his unit) and fits better leading an army of my 4th Company Ultramarine Space Marines. 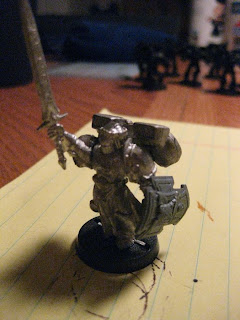 Here is the model I converted originally to represent Idaeus, even before Global posted his rules. He is painted more now, but not completed yet. I'll update when I finish him.