Here it is, a couple days late. This Saturday Gargunki and I had a blog vs blog battle report to take a break from the Planetstrike League. He was so into Planetstrike mode, that he tried to play 3 HQ choices! Haha. The error was quickly corrected after deployment, and we all had a laugh. Then we found Globalsmack's die that had mysteriously disappeared the previous game. Anyways! On to the game...

Necrons vs Ultramarines ... Red vs Blue 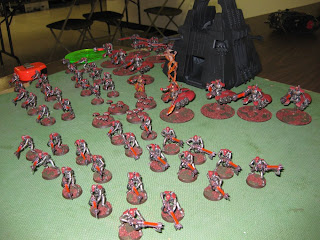 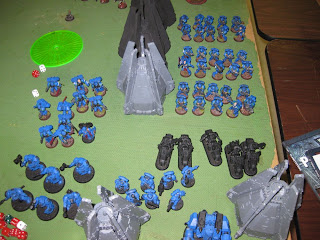 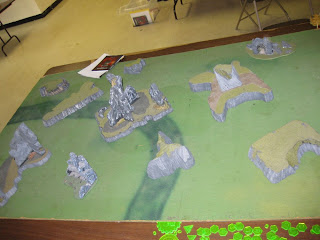 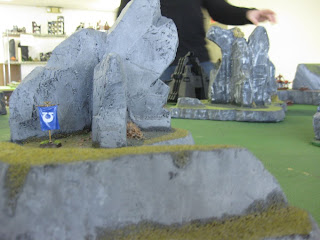 I chose to deploy first, and go first. This game I decided to try a full drop pod/deep strike army for the first time. I did have 1 unit of Scout Bikers, but they would be infiltrating. Gargunki set up his Necrons (plus one Destroyer Lord before removing it...) and I infiltrated and scout moved my bikes before The Deciever re-deployed the unit closest to the bikers. 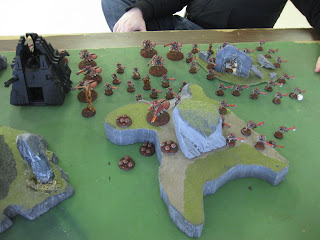 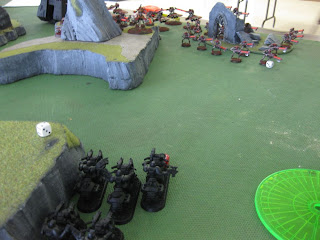 I dropped my first 3 pods, and forced one unit of Necrons to break. Unfortunately my Sternguard were not ont he table side near my locator beacon, and scattered out of effective reach. 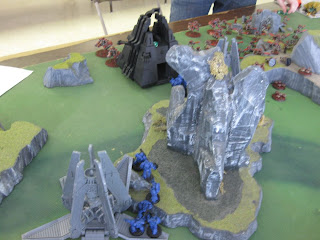 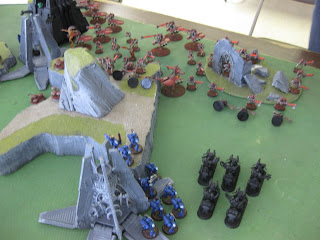 Then theNecrons took out a couple of the Sternguard, blew an Ironclad arm in shooting, and then The Deciever demolished him in assault. My first turn drop Dread was poorly placed looking back, especially when he didn't blow anything with his melta and 2 hkm's first turn. 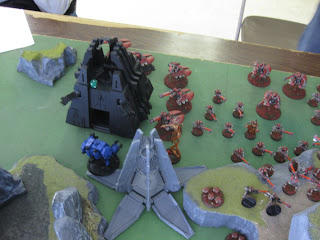 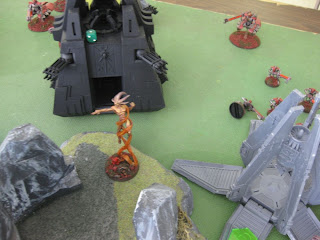 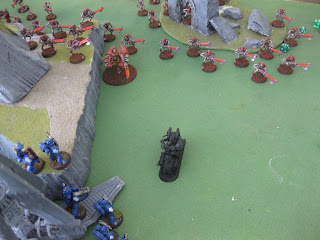 Fairly uneventful for me. I dropped in my Assault Terminators. This turn was the actual turn we figured out the Destroyer Lord wasn't supposed to be in the game. 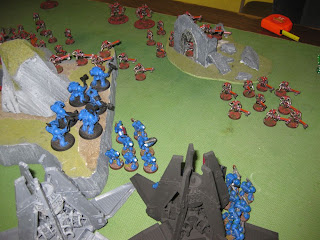 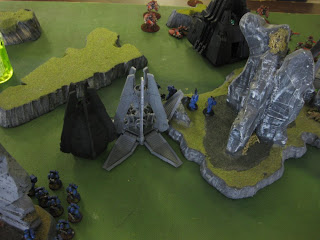 The Necrons unleashed the fury onto the Assault Terminators. Gargunki really didn't want them hanging around. 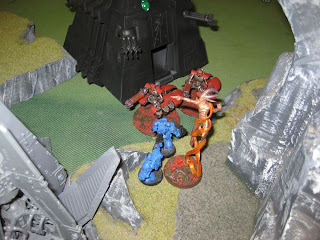 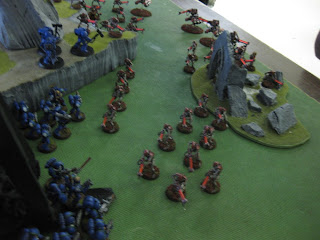 My Asault Squad deep strikes onto the board, and breaks the Destroyer Squad with the help of a Drop Pod shooting. In asault, I rolled snake eyes on the saves of my remaining 2 Assault Terminator armor saves! Ouch. 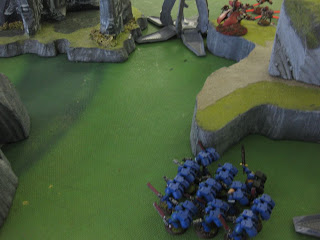 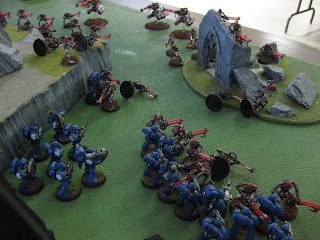 The C'Tan in combat with my hopefully scoring Space Marine Tactical Squad on the opposite table corner only kils one marine. All other combats are ties or otherwise uneventful. 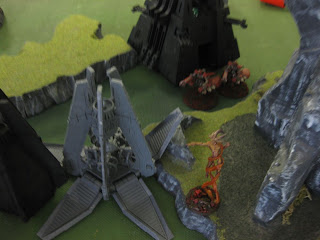 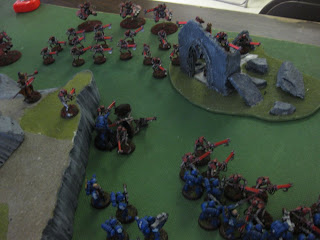 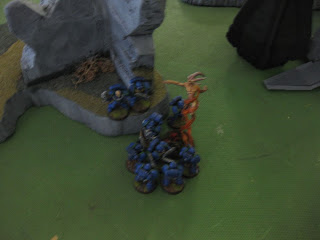 Shooting and Assault phase kills his Necron Lord and the unit he is with. Other combats are pushes again. 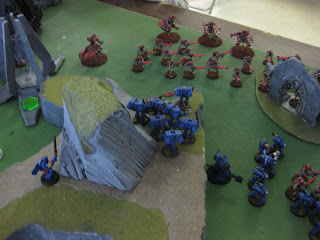 The Lord gets back up to his WWBB roll, and teleports out of combat. My Assault Squad falls back to shooting, and my lone Librarian makes 2 huge invulnerable saves to Heavy Destroyers. 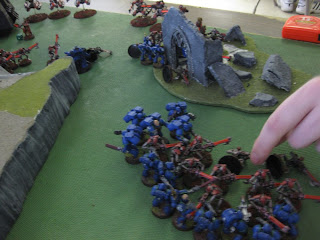 Not much in the way of shooting, and we have assaults with my Captain, Librarian, and Assault Squad. 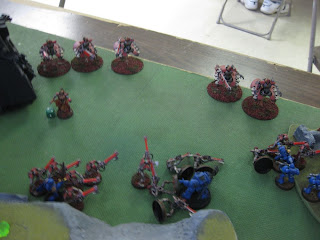 The Necrons teleport out of combat to save themselves, and leave my characters in the open to be shot up. The Librarian is tough, but finally dies, and my Captain makes all of his saves. The C'Tan finally destroys the Marine squad, and all other combats are fairly lame.

My Captain kills two Heavy Destroyers in close combat. Revenge for my Librarian! More minor casualties and no combat resolutions. 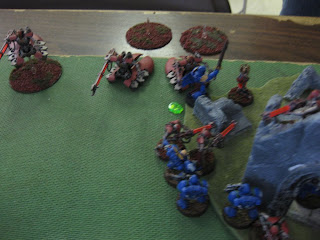 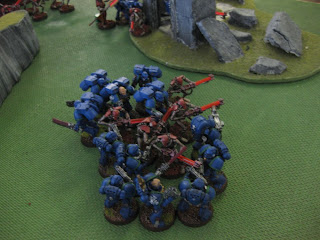 The Destroyers get ported and saved with WWBB, and the 3 Gauss Cannons fail kill the Captain! But he finally falls to 2 more units forced to shoot at him. Otherwise all the combats push again, and we are left with one objective contested, and another uncontrolled. The game ends in a draw. 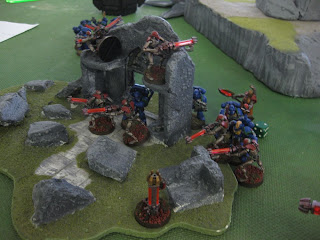 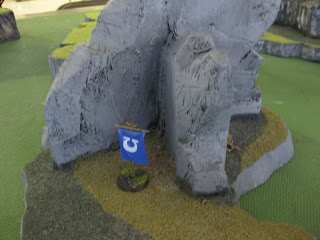 I think I would have done much better with a traditional army for my playstyle. But overall, this was meant to be a fun game to try out a drop pod army, and it turned out to be a good one.
Posted by Rhellion at 7:27 PM