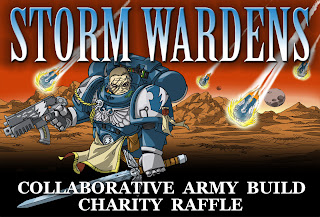 Some of the largest Warhammer 40k Blog sites out there are working together on a charity army raffle for Doctors without Borders.

The Storm Wardens are a new Space Marine chapter from the yet to be released Deathwatch RPG. Together with Games Workshop, Fantasy Flight Games (Horus Heresy, Wings of War) has been developing the game which will be released this summer.
They approached the folks designing the Death Watch game while planning this project, and told them we were thinking of building a Storm Wardens army, and they loved the idea. They have been working with us in getting the look of the army just right and giving us some great unreleased background and imagery.
They are going to build a large Storm Wardens Space Marine army with a decked out HQ, Tactical Marines, Veterans, Scouts, Terminators, and a bunch of vehicles, an army that any commander would be proud to field.
We will be able to see the army units come together and follow the army build progress through links to all the builders blogs on their "Storm Wardens" mini blog roll.
Who will be working on the army?
Mike & John (Santa Cruz Warhammer)
Thomas Wynn (Wynn Studios)
Jawaballs
Ron Saikowski (From the Warp)
Mister Justin (Secret Weapon Miniatures)
Mik (Miks Minis, Barter Bucket)
and Dave Taylor
Along with the blogger build team, we are going after some hobby retailers to give up some loot to add to the army prize. Secret Weapon Miniatures is donating all the custom bases, and Chessex has already sent us the custom dice.
Posted by Rhellion at 6:23 AM