I was at my FLGS today to get in a Galus Crusade game for 40k, and also got a chance to take a good look at the new Warhammer 8th Edition rule book. After my 40k game I was able to sit down with the book and play a 750 point game to get a feel for the new rules. I didn't get to try out any new magic, because neither I nor my opponent put a mage or wizard in our lists. I played again Dave (bugspray)'s new Dark Elf army. He had a unit of corsairs, a unit of repeating crossbowmen, and 2 units of dark riders. He also had a Dark Elf hero (with some armor that game him 1+ and a great weapon. My army was a Warlord on War-Litter with an enchanted shield, Chieftain with BSB, 2 units of 25 Clan Rats, 1 Plague Mortar, 2 units of 20 Slaves, and a Warp Lightning Cannon. 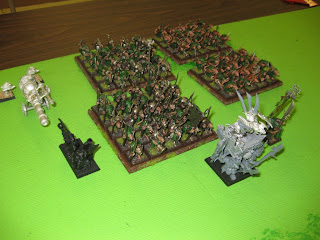 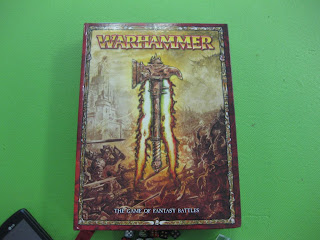 We started by rolling our scenario then setting up terrain. We decided to play on a 4x5 board for our low point total. Our scenario was Battle For The Pass. It's interesting because you play with the short edges as your board edges, and the battle is long-wise on the board. Your deployment zone is your entire table half, but at least 12" from center. You are fighting in a mountain pass, so the long board edges are all impassable terrain. Otherwise the victory condition are Victory Points.

*There are no table quarters for VP's anymore. There is one interesting addition, if a unit champion slays an enemy character, you gain an additional 50 VP's.

This is what our setup looked like. Bugspray decided he wanted to hide his corsairs... both from shooting, and from getting drawn out with Frenzy.

*You can now take a leadership test to stop your frenzied units from charging the units in their charge range. 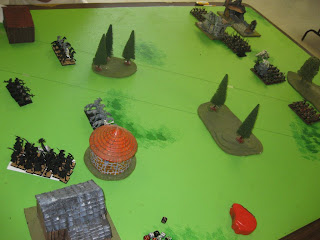 As you can tell, the board is fairly dense compared to most 7th Edition terrain setups. The recommended terrain is d6+4 pieces. We rolled randomly on the chart given.

*Terrain does not slow movement. Cavalry, chariots, and (something else) that flee through terrain take dangerous terrain tests. Similar to 40k, each model rolls a d6 and takes a wound on a roll of 1. Unit models that flee through other models or impassable terrain also take DT rolls.

Before the game begins, Bugspray takes his Vanguard moves. Fast cavalry get this as a free move pre-game, similar to the Scout rule in 40k. If they take the move, they cannot charge first turn. We then roll off and he gets first turn.|

Turn 1 he marches his fast cavalry, then shoots with them (I think this is new) killing 2 slaves. I declare a charge vs the closest dark riders, they choose to flee into terrain, but don't lose any models to DT rolls. 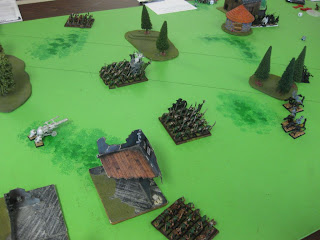 Turn 2 he rallies from his feigned flight, and destroys my weapon team. On the other side of the board his other dark riders flee from a charge, and pass through a building while fleeing, taking 1 casualty to a difficult terrain test. My cannon misfires again on the second roll, meaning it fizzles but doesn't misfire.

Turn 3 the dark riders harass my slaves some more as I march forward. This time my cannon kills 2 crossbowmen.

In turn 4 the crossbowmen stand and shoot vs charging slaves, then get charges in the flank by Clan Rats. They lose combat and flee, and the Clan Rats take a Leadership test to not give chase, and reform after combat facing the corsairs. During this turns movement phase I left my Clan Rat unit with my Warlord sitting out in the open, hoping the corsairs would charge them. 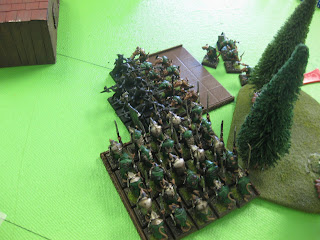 In the Dark Elf turn 5, he does charge them. His Hero challenges my Warlord, with no result on either side. I lose the combat, but Leadership 10 because of Skaven rank bonus to LD, and I pass. 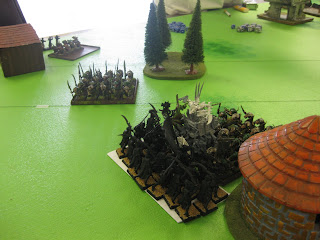 In my turn 5, my ruse has worked, and I charge the flank of the corsairs. On the other side of the board my cannon kills 2 dark riders. The double Clan Rat assault is too much, and even though the Warlord and Hero do nothing to each other, the tide of rats pulls down too many Dark Elves, and they flee and are destroyed. After this combat, we called it. I had only lost a weapon team, and bugspray only had 3 dark riders remaining. 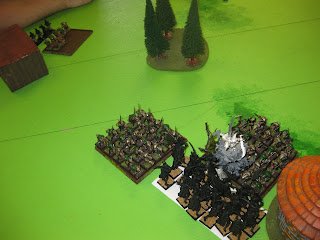 The game was a lot of fun for a small game, to learn the rules a little better. Nest time I will definitely throw some magic in there. Here are some more notes:

*Always strike at initiative order in close combat. Charging gives +1 CR, and there is no longer an outnumbering bonus.

*The second rank gets to attack once in combat. If you are stationary with spears, you get three ranks. If you are horde, are stationary, and have spears, I believe you will fight (or get assisting attacks from) 4 ranks!

*Shooting is in 2 ranks. Bows have a volley rule to fire in more than 2 ranks. Stand and shoot minimum range is the movement value of your opponent.

*Pre-measuring is allowed! But, charges are now movement + 2d6", meaning you my fail a charge you would have made for sure in previous editions. If you fail a charge, you only move the distance rolled on the 2d6. Cavalry add 3d6" to their movement.

I can't think of anything else right now. It was a lot of fun though. I didn't get a chance to look too much at the other scenarios. I am looking forward to playing them.
Posted by Rhellion at 9:58 PM