The Defense of the Western Outer Defense Line

Early before dawn, the Command Bunker picked up a faint transmission...

The small Space Wolf force dug in to their trenches as the glint of sunlight just touched the horizon. The friendly transmission came over the communication lines as the Long Fangs anxiously awaited contact from within their bunker, "This is Rune Priest Víglundr. Hold tight, our force is preparing to drop to your location. We have Tau ships incoming on your position and we should arrive as they do. We must hold that Command Bunker!"

The Wolfguard, Skadd, spit in response, and commented to his squad of veteran marksmen, "They better get here soon. We have but a small force to battle what sounds like an elite battle suit formation. We've seen this type of attack before, Fangs. Just stay true to your senses".

As the morning sun rose, the first salvo hit. The orbital strike blasted around the Command Bunker, and destroyed an automated gun emplacement. Blasts peppered the tanks around the bunker, shaking their crew but ultimately doing no damage to the rest of the compound. Then the first enemy Crisis Suits dropped, along with heavy weapon support. 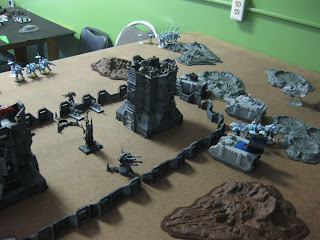 Helm Trueblood, last of his pack and now titled Lone Wolf, roared into the voice communicator, "There they are men! Leave the glory to me, and you just try to stay out of my way!" as he saw the suits ready to engage. They fired a salvo of plasma that tore at his armor, and wounded him even in his battle frenzy, and vaporized one of his trusted Fenrisian Wolf companions. "Bastards!" Just as the heavy Broadside battle suits fired their heavy railguns into the bastion that housed their compounds turreted battle cannon. The bastion came crumbling down. Another unit of battle suits dropped next to the Vindicator and fired of more plasma rounds. Before it could turn and blast them, the suits jumped onto the tank, and unleashed their grenades, disabling its cannon and destroying the tank treads. 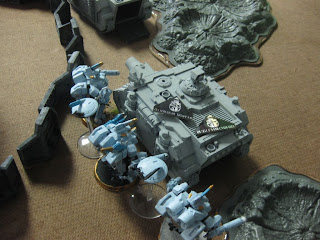 "We're inbound now!" claimed Víglundr, as his drop pod crashed into the dense earth before the Crisis Suits. "Out and don't leave a single tin can standing!" he ordered as he activated the runes on his massive axe, their energy pulsing. His squad disembarked from their pod and rapid fired into the suits, cutting them down in a hail of Boltgun fire. Then the Long Fangs unleashed their version of Hell on the remaining Tau, and blasted them off the face of the planet. "AH! You c*cksuckers didn't leave any scraps for me, dammit!" shouted Helm, denied the glorious combat he deserved. Squad Beta's drop pod landed in front of the heavy battlesuits that had destroyed the bastion just moments ago. The Wolf Guard second in command of the defense of the Command Bunker, Mornstar, left from the pod and THREW his thunder hammer at the closest Broadside. A shield drone intercepted his hammer and exploded. "Don't just stand there you pups, show them what you've got!" 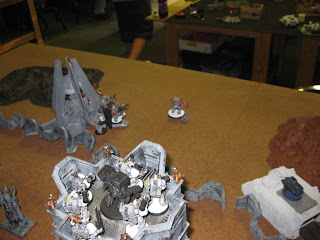 All around them, more teams of Crisis Suits were dropping from the sky, shooting into their ranks. Víglundr was struck twice as his unit began to fall to the massive amounts of plasma fire taken by his unit. "By Russ's beard these scum have a lot of plasma!" As Mornstar smashed through the remaining suits, he turned to see Víglundr gunned down by a massive Tau battlesuit of unknown design. "Dammit, no!" 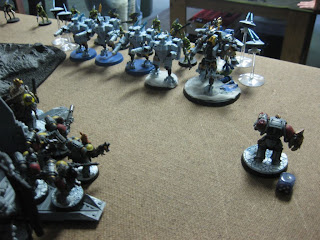 As a Devilfish troop transport raced through their lines, undoubtedly with a deadly payload, another squadron of battle suits dropped in their lines, aiming at destroying their command bunker. "More pods coming in! Lets go boys!" Skadd shouted to his squad, and let loose with his Cyclone missile launcher. The drop pod reinforcements landed just within their compounds walls, and unleashed it's fierce cargo of the Grey Hunter squad within. As another pod dropped nearby, the wolves began pouring it on, and more tanks were rolling over the hills. 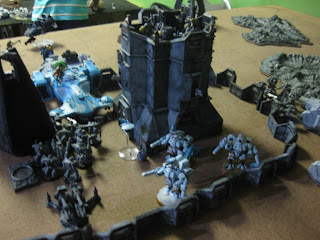 The firepower of the long awaited reinforcements proved too much for the Tau elite strike force, and they began to fall one after another. Mornstar ripped through suit after suit as he led his squad to the center of the enemy drop zone, and towards where Víglundr fell. Before him, the giant Tau suit rose up and fired off a few rounds, before it jetted straight for him with retinue in tow. "So you want to play, eh?" he mused, and then cleaved the suit in two with the might of two normal Wolf Guard! "Heh, no game at all".

As the remains of their force were run down and blown to pieces, one remaining squad of Broadsides unleashed their railguns again, striking into the command bunker. As it began to crumble, Skadd leaped from the nearest firing port to safety, and his power armored squad brothers followed. 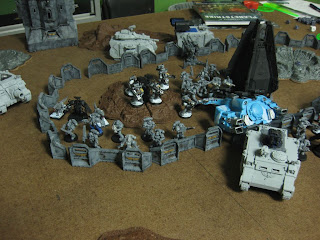 As Mornstar made it to the wreckage of Squad Alpha's drop pod, a pile of Tau and Space Wolf bodies began to .. As he readied his hammer, Víglundr slowly rose to his feet and laid his brothers down who had died honorably in battle. He surveyed the battlefield and annoyingly looked hard at the ruins of the command bunker. "Hey, we didn't lose it" Skadd joked as he walked up to his commanding officer. Mornstar let out a bellowing laugh.