Thanks for reading my blog, because today Rhellion's Tabletop is 100 posts old! I've almost been kicking around a year now, and this blog has really enhanced my hobby experience and kept me motivated.

In other Rhellion hobby-related news, my wife has decided to give 40K another go. She played Eldar about 6 years ago, but was mostly a painter not a gamer. This past weekend she took a trip to our FLGS Pandemonium and picked up Codex: Blood Angels, a squad of new Death Company, and a Baal Predator. She also drafted a bunch of my unused Codex Marines to fill out a full 2000 points already. She has a ways to go to learn the rules of the game, but I'm already excited. Haha.

In Galus Campaign news, I've created my campaign Hero with the 40K Fight Club Character Creation Rules. I'll be playing my first Galus game this Friday, and should have a full battle report next Wednesday, after the first period is over (so as to not reveal stratagems). Here he is:


Víglundr, Son of the Bear, Slayer of Daemons 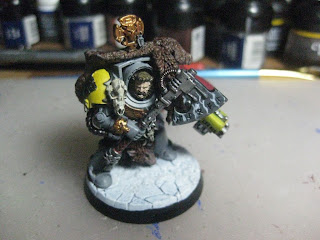 Víglundr was a massive man even by Space Marine standards when he was discovered by the Wolf Priests in his home village. He was the Village Seer's son, but as a great warrior he lead war parties in defense of his village against the warring factions of Fenris. While going through the trials of the Space Wolves, he was singled out because of his attunement to the Rune's, and his ability to harness their powers specifically for hand to hand combat. He became a Rune Priest while his other brothers became Blood Claws, and as they all because Space Wolves together he stood not in the rear commanding the powers of lightning and storm, but in the front line swinging his force weapon and slaying the enemies of the Chapter.

His attunement to the runes and martial prowess with his runic axe, Kjonir, earned him place on expeditions to the fringe of the Eye of Terror in defense of the world there from Daemon and Chaos Cultist raids. On one such defense mission, Víglundr was at Brom Wolfheart's side when a great Keeper of Secrets was summoned to the battlefield and began to lay waste to the Space Wolves before it. Víglundr stepped forward and took a mighty blow from the Daemon that would have cleaved a normal Space Marine in two, and stepped forward and sundered the Greater Daemon in turn. Instantly the Chaos warband's resolve left them, their battle lust gone, and they fled. Víglundr just stood and led the howl of victory, with a gaping hole in his side.

[The Force Weapon upgrade allows him to cause instant death even if the enemy is immune to instant death.]
Posted by Rhellion at 10:28 AM