Another unit, and thoughts

I've been painting into the night, and I finished my Fenrisian Wolf unit. This means I'm caught up on my 2010 painting resolution, with plenty of time before next month. Maybe next weekend I can start another unit of Troops of two to begin fielding more of a fully painted army. I only need to leave 1 Troop for the upcoming month that requires them for my resolution. 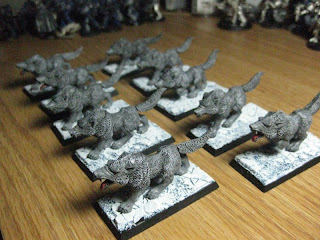 I played two games today with my 2000 point Wolf Lord list. Similar to the list I have been playing for a few games now, also running with 4 Grey Hunter squads. First game I forgot to assault with my WL, and he got shot up by the Tau. I still demolished the Tau pretty soundly, but some unlucky game end rolls prolonged the game and my opponent had the time to contest and end in a Draw in Capture and Control.

My second game really gave a glimmer of hope for future use of the Thunder Wolf WL. I played an Annihilation game against Dark Angels and tabled them. The Wolf Lord did seriously well. His performance in the game is making me rethink wanting to get some Thunder Wolf Cavalry asap. These are the models I am thinking about getting now. The Mr Dandy models are just too big I think. These ones are sold on EBay (not my models): 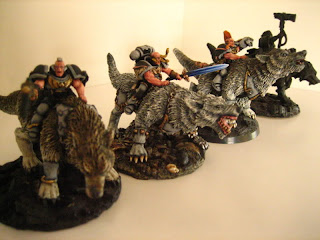 The list played well. In the first game the 4 Troops choices (10 man squads) really game me the ability to win the game, though I couldn't capitalize. The second game the Long Fangs were excellent, the Lone Wolf did well, and the WL made me think there still is a place for him in my list.

Good gaming for a Saturday at the GW store.
Posted by Rhellion at 4:23 AM