Skaven and the Horde unit rule 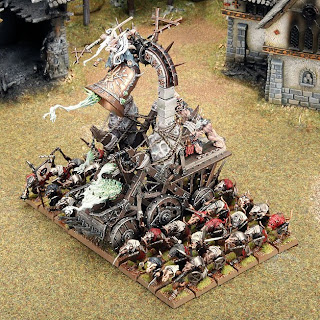 8th Edition Warhammer has a new rule called "Horde Units". The regular rules state that units attack with both the front rank and the 2 rank as well. Units in the second rank get only one attack instead of their listed attacks. Horde units are units that are ten models wide. Horde units allow a unit to attack three ranks deep instead of just two. What I don't know yet for sure, but seems to be the case from demo game, is that spears stack another rank of extra attacks. This means I will have to field at least 40 Clan Rats with spears for the max return on this strategy.

What I think is necessary for these Horde units, as Skaven, is to make them unbreakable. Who wants their 40 Clan Rats failing a Fear or Terror check and running away? The best way to do this is to add a Screaming Bell to the unit. It adds a Grey Seer with 360 degree line of sight for spells, makes the unit unbreakable, and also gives your unit more ranks (keeping your 10 wide 4 ranks) by taking up the space of 15 Clan Rats. BUT, it also means a lot more Clan Rats are touching your Grey Seer's base if he just happens to explode during a miscast!

You obviously shouldn't be fielding your entire army as Horde units. Right now I think there are 2 good options. Clan Rats with a Screaming Bell, and of course at least 30-40 Plague Monks with a Plague Furnace and Plague Priest. These two units with be the core of the army. Both unbreakable, and both carrying a character on a large mount. The smaller support units of 20-25 Clan Rats and Storm Vermin are what you will need to have more weapons teams. I would definitely take a couple smaller units to get my Plague Wind Mortars on the table, as there is no more guessing ranges for war machines.


As we have the 8th Edition Rulebook in the hands of players now, there will be more reviews and strategy discussion on the different blogs. So far I can only interpret other blogger's reviews and come up with my own feelings. Maybe I'll call my local GW Hobby Center and get a demo in today!


Also, the new boxed set is being released in September, and is called Island of Blood. It will contain Skaven and High Elves, and will apparently have a plastic Skaven weapon team.

Enter, if you dare, the Warhammer world; it is a strange and dangerous realm, riven with battle, bloodshed and slaughter, twisted beyond sanity by the warping power of Chaos.

The Island of Blood is the new boxed game for Warhammer and is released this September. Packed full of stunning plastic Citadel miniatures and containing all the rules, dice and templates you'll need to play, it's the essential purchase for fans of the Warhammer hobby. Meanwhile, if you like the Battle for Skull Pass boxed game (and who wouldn't with all those Goblins and Dwarfs Dwarfs) then it only seems fair to point out that once the last few remaining copies are they're gone, and they're never coming back! Pick one up while they last.

In August we'll be featuring more information about The Island of Blood here on the website and the full details will be released in September's White Dwarf, so keep your eyes peeled.