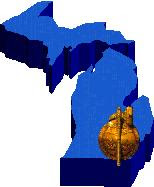 In order to help people along who are interested in starting new armies for 8th Edition, Brian and the Great Lakes Warhammer League have released their version 1.0 rules for Army Composition to be used in the League and GLWL Events. If you're interested in the league, I played last year for the first time and had a great time, winning my division but not scoring enough points to advance to the final tournament. You can check out the GLWL HERE.

The following army composition and magic rules have been put in place to encourage
players to build 2500 point armies which are balanced in nature. It is the opinion of the
League Office that when all players participating in a competitive event build balanced
lists, the likelihood of getting a bad match-up based on the army list build (i.e. the “Rock /
Paper / Scissors” affect) is reduced and the enjoyment factor for the vast majority of
players participating in the event is increased.

Power Dice You can use a maximum of 12 power dice in each magic phase, regardless
of the source.
Power Scrolls: Power Scrolls are banned. You may not include them in your army.

Questions ?
If you have any questions related to this document, please e-mail Brian @
mi_whplayers@yahoo.com