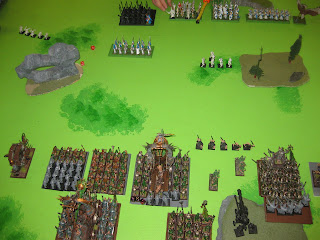 I played another 3000 point game tonight trying to fine tune a list I had been contemplating for 'Ard Boyz. My game Saturday was getting used to the high point level, but was filled with 'fun' stuff I wouldn't truly take to 'Ard Boyz. Tonight I faced off against Brian F. from the Great Lakes Warhammer League and his 'Ard Boyz tuned High Elf list! I wrote out my list a few times today, and with the help from the lads over at The UnderEmpire, decided on a Seer/Warlord list rather than a dual Seer list. I was leaning towards dual Seer all week but decided against it. I'm glad I did, the balanced list did well.

First turn, Teclis IR'd Dwellers Below to drag down 18 of 30 Clan Rats. Thankfully my Grey Seer passed his test (thank you S5 Rat Ogre crew). Not much else happened. My turn 1, I warped his unit of Swordmasters into clan rats. Small, elite infantry units are the perfect target. I used 6 dice and my power scroll, but rolled 3 6's anyways. I was also able to take out the Bolt Thrower on my left in one round of shooting with the Gutter Runners. Poisoned slings ftw.

From here on out, Teclis used a lot of powerful magic without anything to stop him, and I advanced while taking casualties. My Abomination was able to catch the Eagle second turn because he was grounded with the Storm Banner, after the flaming attacks from the Archers only wounded him once. My Storm Vermin made a good charge to get by the Shadow Warriors (?) in combat with the Gutter Runners and then ran off the Spearmen they charged. Warlord riding a war litter, with a Weeping Blade made short work of the unit champion in the challenge.

Brian made some horrible charge rolls, leadership rolls, to hit rolls, etc, etc, etc... his rolls were definitely against him. But, my Plague Monks and Plague Furnace didn't really get into combat. They were slowed down by my deployment. Too many slaves surrounding my Furnace unit, and it never got into the thick of things.

But after the fighting, it didn't matter. Finally this game I really think my Gutter Runners did excellently, and I was glad I stuck with them. I only truly lost 65 victory points (one weapon team) during the whole game. The other units that broke were able to rally to deny points. I am feeling pretty comfortable overall with the list, but I would definitely like to get some more practice in.
Posted by Rhellion at 11:21 PM