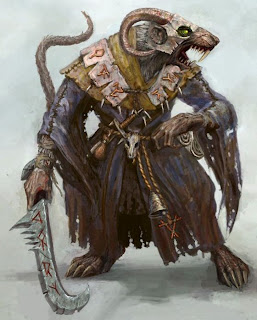 Days away from the Warhammer 8th Edition release and I spent some more time playing the new Warhammer rules this week, getting 3 more games in. I played twice against High Elves and once against Orcs and Goblines (more or less just goblins). I played to a Draw in both games and realized something: it is hard to win in 8th edition. According to the rule book, you need to score twice as many victory points as your opponent to win... every other result is a draw. No more minor, major or massacre victories.

As for the games themselves, I tried out some very different lists to get a better feel for my Skaven in the new edition. My first list was fairly balanced, and had the Furnace, some mortars, and the Doomwheel. Everything performed well enough but the mortars were very nice with no more guess range and pre-measuring allowed. My second game was an all infantry list, 1000 points with 201 models! There were so many dead rats at the end of the game vs the Goblins, but I still almost wiped out my opponent to the man. But since I didn't, we counted it up and had a draw. My third game I tried out magic in the form of a Grey Seer, and also tried the Hell Pit Abomination. The magic phase was very nice to me in this game. First turn my level one Plague Priest got off Plague. Later my Grey Seer cast Skitterleap to avoid what would have been death in close combat, and cast The Dreaded 13th Spell to wipe out a unit of Phoenix Guard. The Hell Pit Abomination did not perform as well as I'm used to, because he got tore up by Dragon Princes. He killed them but left with only 1 wound.

High Elves with ASF and re-rolls are just nasty. My large troop blocks were just decimated. I was losing many combats because just too many hits were getting through. High Elves will do very well with this rule. It is also what crippled my Hell Pit Abomination. 4 Dragon Princes with lances charging the HPA, also re-rolling attacks with their lances. Ouch.

Swift Reform rule is awesome. Just awesome. Probably one of my favorite new rules. A swift reform allows you to take a leadership test if you have a musician. If you pass, you may reform as normal, THEN take a regular move without marching. If you fail you may only reform without moving. This, combined with free reforms after winning combat (or a leadership test to reform after losing) really speeds up the death and carnage in close combat. More units fighting, lots more models dying.

I really like the new magic system. My opponent was getting pretty unlucky with his miscast rolls and becoming a little jaded with his failures with magic... but after it was all said and done he still did alright and we were pretty balanced. My Grey Seer list did it's job (which was to take out a unit with the 13th spell) without dying. In fact he was the only non-slave model on the board at the end of the game. Thank you Skitterleap!
Posted by Rhellion at 7:40 AM