It's that time of year again when everyone brings the filth and fights the worst of the worst composition. For those that don't know, Ard Boyz is a 3000 point tournament with no comp, Grand Armies, and special characters allowed. The format is 3 separate tournaments, over 3 months, with 3 rounds each. To be invited to the next round, you must place top 3 at a Prelim and then Semi final to move on. Last year I fought through all 9 games to get a tie for 3rd place at the Chicago Battle Bunker Final for Ard Boyz 2010. This year was a much harder Prelim, at least army composition wise...

First, lets start with my list. I discussed my army build on the BAd Dice Podcast, but I ended up changing at the last minute to to some interest in getting another hard hitting unit, but not sacrificing any I already had :

As you can see, I dropped the Screaming Bell and tweaked some other points in favor of adding a 6 strong Rat Ogre unit I was hoping to count on to harass the flanks.

We ended up having a very poor turnout for our Prelim location, but that is to be expected with SO MANY prelim locations now available. The second round will have only 1 location per state or so, so I expect much larger turnouts. I still got in 3 quality games against 3 very tough lists. So lets get right into it...

Scenario 1 was Meeting Engagement with random sight distance. My opponent was hindered in many of his attempts to shoot by rolling low, but I don't think it effected the outcome of the game at all. I set up first and deployed my Slaves and one Hell Pit up front ready to take on the Witch Elf horde. I was planning on stalling with Slaves all game, but ended up not having to! My opponent did not take initiative by rolling a 6, so I went first.

I moved forward ready to take charges and getting into the witch elves with sacrificial slaves, I manuevered my doomrocket 14 inches from the center of the Witch Elves who had also set up on his own deployment line. The winds of magic were kind, and after launching a scorch on the witch elves that failed, I skitterleaped my second Grey Seer into the dark elf lines next to the Cauldron. Power Scroll and crack's call lead to a dead cauldron and 2 of 3 dead bolt throwers in his lines. 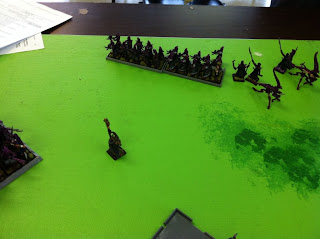 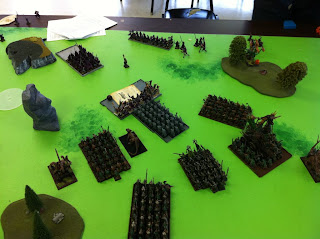 After this turn of events, I crippled his plans to continue to buff up the witch elves and run through my army. Shortly after, I fired a perfect 14 inch doomrocket shot into the center of the witchelves and killed 25 in a single go! My Gutter Runners had managed to put 2 wounds on the hydra as well on the far flank. Another turning point in the game was when the Furnace unit was able to charge the witch elves that remained after their slaying of many slaves that continued to hold them with Steadfast leadership. Crone Hellbron challenged the Plague Priest on his furnace, put all of her attacks onto the furnace, and with 7 hate-filled strength 10 attacks only did 5 wounds, so that when everything attacked back I hit her in the face with the wrecking ball (on my own turn) 10 times fr max combat res.

After wiping the Witch Elves I was able to finish off the Dark Elfs easily and complete the game with perfect battle points 24-0. My opponent conceded after 4 turns so I also scored 3250 victory points vs his 400.


Game 2 was against Mike Hernandez, who I have posted before as some of my main compestition and one of my toughest opponents that I regularly play against. During setup, I deployed using the same strategy that I used against him on a smaller scale in the pre-Adepticon Primer where I beat him on the final table. I loaded up my troops on my right flank away from the side where he deployed his first 2 units of Salmanders, content to let him flame my Slaves. 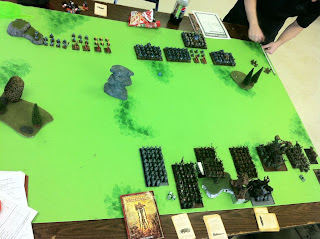 Mike went first and moved forward. His Blood Soaked Choppa unit to get +1 strength and attack were the Saurus with spears. Mine were my Storm Vermin. He moved his Chameleons on the right to attempt to slow down my hell pits that filled that side, and had ineffective magic. I was able to get my Storm Vermin into one unit first turn, one Hell pit into another, break through both units into that side's alamander pack, and really disrupt the entire flank on the first turn. 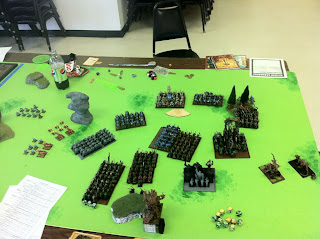 I took the charge from Mike's Blood Soaked choppa unit with my Slaves and held them to be magic'd and doomrocketed before eventually getting a Hell Pit into them to finish them off. My Storm Vermin finished off the Salamander pack and overran out of charge range, leaving my Furnace able to charge the Saurus with the Old Blood. The Temple Guard got into my flank the next turn, leaving them open for a triple abom charge combat! 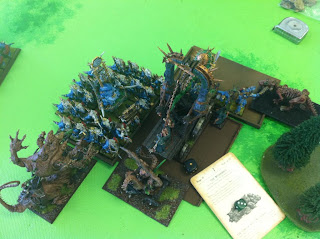 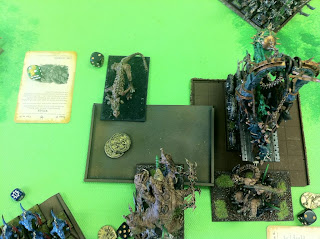 The Abominations worked through the Oldblood, Saurus, and Temple Guard over 2 turns. Over those 2 turns I used my Power Scroll to cast Wither on the Slaan unit, and the next turn also got it on irresistable force. At minus 2 toughness vs Hell Pits, you are in a tough spot even as Saurus with a flaming banner. The far Hell pit finished off the Old Blood and the second turn got into the rear of the Slaan, killing him on our last turn time allowed and getting me the maximum victory 24-0 with about 2900 vps vs 400 or so again. 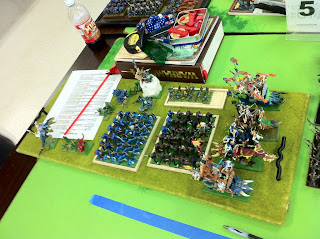 Wow, this was definitely a monster mash list. I was quite nervous sitting across the table at first, because I had dropped all of my cannons in favor of the hell pits because of the scenarios. 4 stegadons and a Carnosaur should be very rough against my army if supported right with Saurus. BUT, we would never find out...

I positioned my Plague Furnace on the Chaos Portal in the center of the board, because the scenario was such that if you controlled it you got +500vp's, but if no one controlled it the game was an auto Draw. It didn't matter though as my second Grey Seer was Skitterleaped next to the line of Stegadons and the Slaan in the building. Power Scroll, Cracks's Call, and a phenominal distance roll of 18" on the 4d6 hit all 4 Stegadons and the building with the 30 man Saurus unit and Slaan. Unfortunately for me I only killed one ancient stegadon, but unfortunately for my opponent I rolled a 6 and destroyed the building. According to Crack's Call, if you hit a building you destroy it on a 5+ and then EVERY MODEL inside must take an Initiative test or be removes. After the dice rolling, he had 5 of 30 Saurus left and his Slaan had fallen into the cracks of the Under Empire. My opponent shook my hand and said good game, and I won the third game of my Ard Boyz prelim.

Last year was a better turn out by far for the prelim, but I do believe this year the limited armies were tougher competition and composition. I will be attending the Michigan location for the Ard Boyz semi finals, held at the same store as my prelim (Pandemonium in Garden City, MI). I expect a much larger turn out, and a very different Skaven list now that I have already peaked at the round 2 scenarios. I will of course be updating my game when the time comes, so follow me on Twitter @Rhellion, and keep an eye on this space!

P.S. I didn't get the 13th Spell off the entire tournament. I cast it once vs Dark Elves and got scrolled.
Posted by Rhellion at 9:28 AM