Here is my first event report from this year's Adepticon. The Big Brawl was a 3000 point, no comp tournament with only two restrictions: no special characters, and no Grand Armies. So not quite 'Ard Boyz, but close. I am having trouble finding my notes, so I will do the best I can. I did very well throughout the tournament, so lets get right into it!

Game 1 and my opponent is playing Orcs! What's that? He has Mangler Squigs? I thought Adepticon restricted the armies by a certain cut off date? My opponent didn't get the memo (or read the rules) and after conferring with a judge, anyone who was playing Orcs and Goblins were allowed to use either 7th OR 8th Edition Orcs, so long as they told their opponent which army they would be using. No problem, I started an O&G army just weeks prior, so I no what to kill (Mangler Squigs, lol). 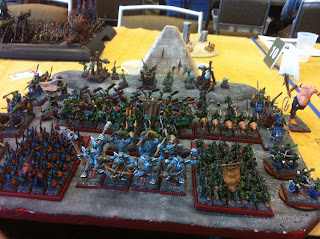 Starting off, my opponent had a Warboss, lvl 4 Orc Great Shaman, lvl 4 Goblin Shaman, and Orc BSB. He had a large unit of Savage Orcs, a couple units of Night Goblins full of Fanatics, Black Orcs, 2 Orc Chariots, some Goblin Wolf Riders, 2 Rock Lobbas, a Doomdiver, a Giant, 2 pump wagons, and 2 Mangler Squigs. 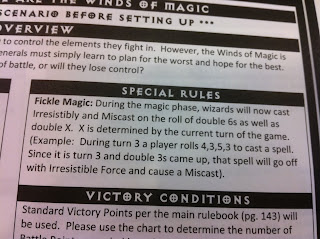 I got hit early, and I got hit hard by magic. The scenario special rules stated whatever turn it was, if you rolled doubles of that number your spells would be irresistible force and miscasts just as if you had rolled double 6's!. First turn, Foot of Gork was cast on my Screaming Bell, then again, then again, and again, and again... EIGHT TIMES. Then he proceeded to hit the Bell with a rock lobba, and roll six wounds when I failed my ward save. Outstanding start to the day. 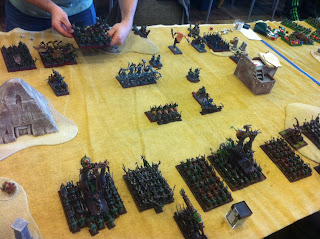 I deployed my Abominations to my right flank, and wanted to use them in combination with my Slaves. But my opponent had about 6 more deployments than I did, so his Mangler Squigs were screaming down the middle of the table. I was able to take both out with a single Slave unit, then once the coast was clear, take out his Giant with an Abomination.

My Plague Furnace was working over time on the opposite flank, fighting its way through the chaff to try and get to the Orc bunker of Savages. Things were looking dire all throughout, and an irresistible force Curse of the Bad Moon didn't help! I was really getting beat up by magic. Things turned full circle when we were running out of time, and I got my last turn. All game I had saved my power scroll, and slowly taken out a few Savage Orcs here, and a few there. On my turn 4 my patients payed off, and his bunker unit was down to only 15 models, including his Warboss, BSB, and Great Shaman. Irresistable (power scrolled) Curse of the Horned Rat warped his entire leadership core to turn the game from a 7-13 loss to a 13-7 win.

Game 2 came against a solid Warriors of Chaos list. It has a level 4 on a disc, a level 2 with Lore of Fire, 2 hell cannons, 2 units of hounds, 6 chaos trolls, chaos warriors of khorne with halbers, tzeentch with hw/shield, a unit of khorne chosen with great weapons, and 2 war shrines. There may have bee a couple other units in there, because again I was beaten on deployments. My strategy of large blocks worked this games as well, though. It also helped my opponent didn't roll Gateway. 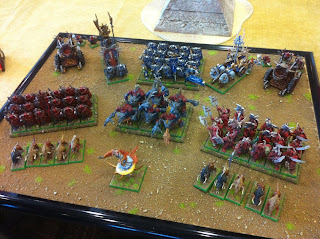 From the start, I again new what my strategy would be against the Warriors. Lower their numbers with my tough items and spells that aren't effected by armor, then use the 13th Spell to finish them off. As the Warriors pushed forward through the center of the board, I deployed my Plague Furnace on the far right flank with the idea that as the rest of my army waited for the Warriors, it would have time to flank. The Hell Cannons were effectively neutralized the entire game by the Storm Banner and Gutter Runners harassing them. 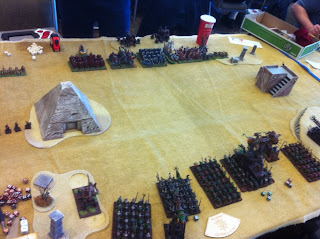 Combat came and was bloody, but it was in the form of 2 Hell Pit Abominations smashing through the Warriors. Normally I try to combo charge HPA's with Slaves. Especially against Warriors, they can't often get the job done against steadfast unit. But also with Warriors, there is the danger of mass attacks just killing you. I initiated a frontal charge with my center-most Hell Pit into the Tzeentch Warriors, because I was much less worried about their killing power. Surprisingly, I smashed through the entire unit in two turns, including the level 2 Fire Mage. He died too early and was not able to do any damage to either Hell Pit, because I shut him down in the preceding magic phases. On the left, a poor roll by me and a good roll by my opponent left my HPA open for a flank charge by 7-wide Warriors of Khorne with Halberds. I thought I was in trouble, but miraculously survived with 1 wound after 2 turns of pounding them to dust to wipe them out. 7-wide hurts when every model touching the Hell Pit takes an auto S6 hit with no armor (roll of a 1-2 on the HPA chart).

The Plague Furnace was able to get in to the Warshrine on the right, and I was able to 13th the Chosen to weaken them before it hit the Furnace unit. It was sooner than planned, but I didn't want a full strength unit chopping away at it, Unbreakable or not. It stayed around long enough to let the first Hell Pit finish off the Tzeentch Warriors, reposition, and rear charge to wipe the Chosen. As the game wound down, we could see the writing on the wall. All three main blocks were destroyed, though my opponent still had his Trolls around. The game finished up as a 20-0 Skaven win.

Game 3 I was on table 5 against an interesting Vampire Counts list. He was using a Lord on a Zombie Dragon! He also had 2 Varghulfs, a Black Coach, Grave Guard, lots of Ghouls, and a few Vampires, one with the lore of Death. We set up, and the zombie dragon and a varghulf were on my right flank, with a varghulf on my left flank. I was content to hold the middle and push my Furnace, Slaves, and Aboms forward well supporting with my Bell and Grey Seers.

Turn 1 was a disaster. He pushed his Ghouls with a Vampire forward. Announcing Purple Sun, large version, Power Scrolled, I expected some damage... but not for my entire left flank to be demolished. Hell Pit Abomination has initiative 4, roll a 5. Plague Furnace has initiative 5 (Priest), roll a 6. Wow. I was definitely put on my heels from then on, rather than being aggressive. Still puching the advantage, the zombie dragon and varghulf were marching down the right flank (as I had activated the Storm Banner to stop him from flying). 2 misfires on the first turn meant I had lost my chance to take out the zombie dragon and Vampire Lord before he came crashing into my lines.

He was able to get his flying charge off on my Screaming Bell by turn 3. From there I was able to challenge and win combat by static res for anough turns that I did finally kill the Vampire Lord AND Dragon, but it was too late by turn 5. The rest of the Vampire army was able to get to my lines and the Bell was eventually taken out. It was disappointing to lose my toys so early when I knew it was horrid dice rolling by me that led to their demise. BUT, that is 8th edition, and I have certainly have taken advantage of the same strategies with the 13th Spell. To cry foul would be hypocritical. The game ended with some anti-climatic crumbling rolls that came too late to make a difference, and the Vampires won the match 17-3.

I have to say, for being a large Ard Boyz style event I had some excellent opponents. The games were all light hearted and fun, even when I was getting Purple Sunned off the 5th table! I can't wait until next year, where I think I will be taking my Orcs for the Big Brawl to switch it up and split the events. As far as results, I got high sports and painting scores to carry me to 23rd place (or so). I really take pride in high Sportsmanship scores, so I was glad to see I was at least a pleasure to play with. Until next year, though, I will just have to keep visions of Purple Suns in my memory before getting another shot at The Big Brawl.

Coming up soon, another battle report from the Adepticon Warhammer Fantasy Championships! 140 Players!!!
Posted by Rhellion at 8:19 AM