And now for the Main Event at Adepticon 2011: the Warhammer Fantasy Championships. 4 games in one day of Warhammer at 2200 points with very little restriction other than no special characters. To start, my list was similar to something I would normally run, but I risked my General by giving him a Power Scroll and guaranteeing one miscast per game if I used it. Here is the list 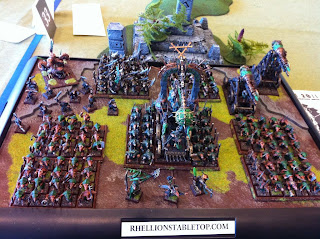 My opponent had 2 Hydras, a Cauldron, General on pegasus, Cold Ones, block of spears, block of corsairs, repeater crossbowmen, and 2 units of shades. My opponent set up first with Dawn Attack with most of his army on my left. I set up with my entire army split, and only 1 unit deployed in the center. 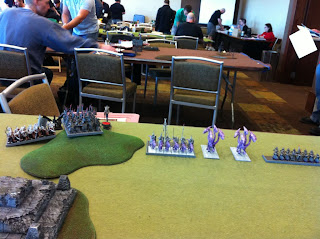 I rolled and stole the initiative! It was now or never so I decided to do something rash to take the game early. Skaven plans NEVER fail...right? My Grey Seer cast Skitterleap and my opponent let it go off. What damage can a Grey Seer on his own do? I decided to place my Seer right in the middle of my opponent's lines, next to 2 Hydras. I then cast a Power Scrolled Crack's Call through both Hydras, all 6 Cold Ones, and his level 4. The first Hydra rolled a 1. The second Hydra rolled a 2. Heartbreak. Laughter. Lamenting the imminent death of my Grey Seer. But he survived! Ever with the Dark Elf Shades on his tail, the scenario rules were basically a Storm Banner, and on the Dark Elf turn I activated my own Storm Banner to stack with the effect. 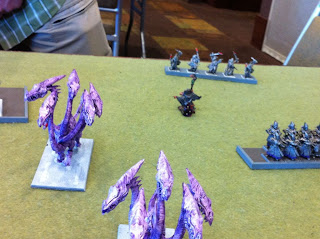 Because my Grey Seer was in his lines, I actually marched blocked his Hydras. The were in a nice line, so on the second turn I shot my Warp Lightning Cannons. The first shot misfired and did nothing. The second shot went through both Hydras, doing 5 wounds to the first and 4 wounds to the second! A sigh of relief as the Grey Seer's failure did not cost me too much. With the Storm Banner active, my opponent could also not move his General into position to effect the game much until the third turn. By that time he had moved out into the open, baiting my Hell Pit Abomination. On my third turn I took a shot at him and the Cold Ones with my WLC, destroying the Cold Ones and revealing the reverse ward save pendant. Next turn I charged my Hell Pit into him and did ZERO wounds. But he did no wounds back, and I won the fight on combat res. My opponent then rolled and failed his leadership, and was run down by the Hell Pit's 3d6 random movement!

That was pretty much the game as my opponent had lost both Hydras, his General, has my HPA in his midst, and my Plague Furnace was mopping up archers and coming down his flank. Great game, crazy dice, and big win for the Skaven in round 1.

More Elves! Game 2 was against Chris Yu and his beautiful High Elf display that was Player's Choice. The Elves had a level 4 Life mage, Swordmasters, White Lions, Dragon Princes, a spearmen bunker, large unit of archers, a bolt thrower, and 3 eagles. 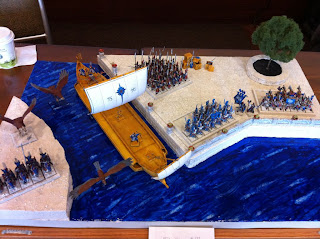 With my deployment I set up to take control of the center of the board, guard my flank from Dragon Princes with Slaves and a building, and move my Hell Pit and Furnace in from the flank. This game was almost entirely tactical movement, as we didn't get into any serious combat until the bottom of the third turn. My Storm Banner combined with Skaven magic kept his Eagles out of the majority of the game and I believe was a large factor to my winning. I saved spell dice each turn to keep the birds grounded. 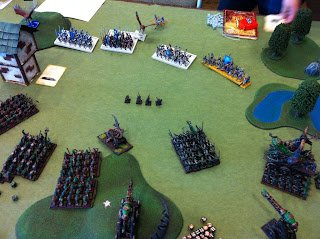 Early on I tried to soften his small but elite numbers up with cannon fire and magic. I even ran my Hell Pit backwards rather than towards him on one turn in order to delay combat for another turn, and it worked out perfectly. My Gutter Runners nuetralized the Eagle and Bolt Thrower in the center of the board late in the game, and I made my moves.

He charged his Swordmasters into my Slaves that had moved up to protect my Grey Seer's unit. The Dragon Princes were into the Slaves that were hugging the building. The Archers had fled from a charge from the Storm Vermin and Furnace, and were out of play (but not out of the game). To counter, I finally unleashed the 13th Spell on his White Lions, that I had waited to use. They were taken down to manageable numbers, but then fled and were caught by my Gutter Runners. I fired Warp Lightning into the Slaves and Dragon Princes, recuding them to 1 knight eventually. The Hell Pit Abomination crashed into the flank of the Swordmasters and decimated them. His two main fighting units gone, the High Elves were effectively crippled.

Throughout the game, my strategy was to dispel Throne of Vines first and foremost. My opponent was very hesitant afterwards to throw 6 dice at Dweller's, knowing his Lord was unprotected. Finally he did decide to go for it, without Throne. 3 times he got Dweller's Below off on my Grey Seer's Clanrat unit. 3 times I passed the test with both my Grey Seer AND Chieftain BSB. This luck, combined with my wiping out the Swordmasters and White Lions, led to another big Skaven victory.

I was 2-0 going into game 3 against what turned out to be my nemesis of Adepticon: Vampire Counts! Next report with cover games 3 and 4, and my final standing.
Posted by Rhellion at 8:23 AM