It was a good holiday hobby weekend. I had a short week last week with my vacation up state, so I was looking forward to coming home, picking up my Island of Blood set, and getting some games in. Lets start with Island of Blood. One word: Fantastic! I love the small rule book, and I love the Skaven models. I already assembled my Skaven set, I traded away my High Elves today for another Skaven set, and I already started some conversion work. At the very least I immediately cut the cleaver off of my Warlord and added a shield. It is silly to have two weapons when one is a halberd! I think I am planning on taking the halberd off the other one as well as the back banner. I might change the head too, I have a cool engineer head left over from my Doomwheel kit I've been meaning to use for a conversion.

After picking up my Island of Blood set on Saturday, I also picked up a Mephiston model for my Wife's Blood Angel army, and I played my first game of Warhammer 40k in about 2 months. Mephiston is a beast! We also picked up another 2 Assault Squad boxes so she could fill out her army a little better, but for our game Saturday we just added Mephiston to her existing army and played 2000 points. I played a pretty standard list and was able to intercept Mephiston with a Lone Wolf to handle him, but she has a much better grasp on how to use him in the future. My opinion is that he is best as a support character following behind another Assault Squad, intercepting armor and assisting in assaults to take the focus off of himself. He also NEEDS cover, either from actual cover or other marines. Fell No Pain probably doesn't hurt either from a Sanguinary Priest. 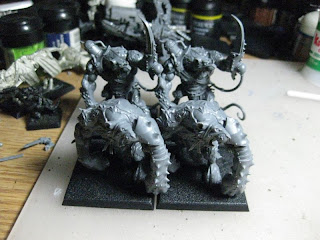 Today I played a a 3000 point 'Ard Boyz practice game against Mike's High Elves with Teclis leading them using Shadow magic. Mike won the 'Ard Boyz at RIW Hobbies, so I knew even though he made some minor changes to try and improve his list, it would be a very close idea of what I would be facing in the semi finals (especially since we are car pooling together). He had a level 2 with High magic, a BSB, and the Phoenix Guard special character. He had a large bunker unit of Spearmen, a small unit of archers, a smaller unit of Swordmasters, a big unit of Phoenix Guard, a small unit of White Lions, a large unit of Seaguard, minimal unit of Dragon Princes, and 4 Great Eagles. I played with the list I used for 'Ard Boyz, but I dropped a unit of Giant Rats, dropped a unit of Gutter Runners, dropped a level of magic off a Warlock, and also dropped his forbidden rod. Instead I added 2 units of Rat Ogres with a master-bred and an additional packmaster.

At the start of the game I scouted one unit of Gutter Runners in front of 2 Great Eagles. The other unit was flanking the other Great Eagles and Dragon Princes. When he tried to open the game by charging the one unit, a stood and shot, killing one Great Eagle with my poisoned slings. I killed the second on the same side when he charged me that turn. I would just like to say now, if you are playing Skaven and do not have Gutter Runners in your army list... go buy them now. Log on to GW, call your store, check EBay, just go buy them. They have proven again and again how valuable they are, both in practice games and at 'Ard Boyz itself.

He advanced slightly and I pretty much rushed forward. Very first turn I cast Plague and it was scrolled by Teclis, and I lost Plague for the game. I then cast the 13th Spell on his not-large-enough unit of Swordsmen and warped the entire unit into Clan Rats. Then my Grey Seer (not the General) rolled a 4 and then a 3 and was instant killed himself. There is a reason I take two Grey Seers, and give the Power Scroll to the second! Magic was not to grand during the game as far as high amounts of power dice, we both rolled pretty much average. But the High Elves had the Banner of Sorcery and Teclis, both adding d3 power dice each casting phase, as well as the crystal that removes a power die and adds it to his pool in each dispel phase. I was lucky that my channel rolls were on fire! Even still, Teclis was great with magic and even rolled FOUR irresistable force spells in a single phase at one point (only 1 with double 6's).

My Hell Pit Abominations were almost non-factors until very late in the game. I fled a charge from Phoenix Guard early that left me recovering until I could get a late charge on HPA 1. HPA 2 was supremely unlucky, as he had a Pit of Shades scatter 8 inches OFF of the nearby Storm Vermin right onto him, and promptly failed his Initiative test. That was the only "deadly" spell I got hit by really. The rest was buffs and debuffs from Teclis to help his army. I already mentioned my one 13th Spell, but I did get another off on turn 6 that wiped out the rest of the White Lions to secure their victory points.

The shooting was very limited in the game. On the first High Elf turn though, he shot my Rat Ogres and killed 1 Packmaster (which is 25%!). They promptly failed their leadership test and fled off the board. This was a very good lesson. I've already drafted a new list with a single unit of 6 Rat Ogres with 3 Packmasters. Throughout the rest of the game I used the Storm Banner combined with Howling Warpgale to stop the High Elf shooting phase and all but shut down the leftover Great Eagles.

My own shooting was not spectacular, but the Doomrocket is a beutiful thing. On my own first turn (I activated the Storm Banner on his second turn), I cast Skitterleap on my own Warlock Engineer from my Grey Seer and sent him behind enemy lines. I set up about 16 inches away from the center of Teclis' Spearmen bunker, rolled 12 on 4d6, and killed 25 out of 31 models in the unit!!! I did position him so that if I rolled too high, I would at least hit the unit behind Teclis and possibly still him too, but the dice gods smiled on my sneaky tactics, and the Horned Rat laughed at the dead elf-things.

I also really nailed the best tactic for defeating Teclis... charge his unit and allocate attacks onto the wimpy elf. Sure he wounds on 2+ with his one attack, but steadfast Slaves or Stormvermin (who finally killed him) will work just fine. In the end I had flank Abomination charges and the Rat Ogres finally making it into combat to wrap things up. Turn 6 the only High Elf unit on the board were the Phoenix Guard, but he had killed enough Skaven that even with only 1 unit left, I only got a minor victory. Against another 'Ard Boyz winner, and Teclis, I will take it and chalk it up as a lot of quality experience!
Posted by Rhellion at 9:12 PM