I made the trip today to The Game Room in Toledo, OH to participate in the second round of 'Ard Boyz. I was expecting a knock down, drag out, hard fought set of games against the hardest lists around. I definitely got that sort of game in the final match, but not really in the first 2. I credit a good draw for my success, and I actually should have done better but I accept the results, and I really did have a good time overall. Thanks to The Game Room for hosting.


Game 1 vs Warriors of Chaos, my opponent was pretty shocked at what I had on the table. It is 'Ard Boyz after all, but he was upset and it wasn't a very friendly game at all. He had 2 Lords fleeing from my Abominations when I ended the game by breaking him, so their points denied I ended up with a Minor Victory. 16 Battle points.

Game 2 was the exact opposite of game one in enjoyment, and I had an absolute blast and my opponent was a great guy. One of the more enjoyable games of Warhammer I've played, because my opponent was a cool guy and not just because I won. The 13th spell ended up taking out his General, BSB, and level 2 caster in this game, as it was his first game against Skaven and didn't realize what the 13th Spell COULD do. I also had some good luck with my cannon and Doomwheel against Minotaurs. 23 Battle points.

Game 3 on Table 1 vs the other Skaven army! My opponent had 1 Grey Seer, a defensive Warlord General, and another Warlord with the Fellblade. Otherwise our armies were similar, as he had 2 Hell Pit Abominations, a Furnace, 2 units of Gutter Runners, etc. Turn 1 I got the 13th Spell off and killed his Storm Vermin and Fellblade Warlord, because he only took a unit of 10 to get the Storm Banner in his list. I took my foot off the gas and he came back, and in the end actually pulled ahead on points. We finally ended with a Draw, and I won 12-10 on Battle points. GREAT game down to the end. 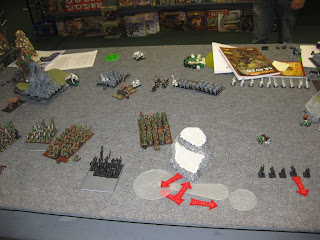 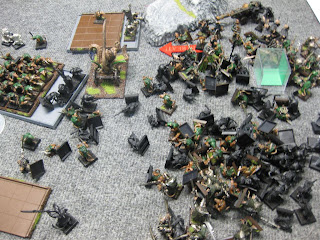 Turn 5 dead pile
In the end there was a snafu, and the Daemon player from Table 2 ended up winning when he shouldn't have (rules mistakes made by both players), and I got 3rd overall. The Skaven player I "beat" was pretty upset, because he probably should have won 1st overall.

The tournament itself was pretty fun and intense. I'm looking forward to Chicago.
Posted by Rhellion at 9:46 PM