Skaven and a Meeting Engagement 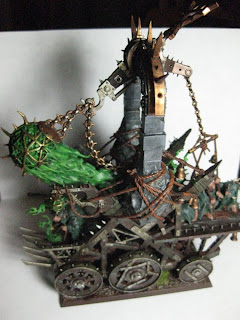 I know I've blogged about this before, but after brainstorming my list and adding in some Plague Monks I was giving some serious thought to a Plague Furnace! The problem comes in when you add the rules for Meeting Engagement where all units and individual characters must roll to see if they are placed in reserve at the start of the battle. The problem is, if you roll a '1' on either your Furnace or Monks and not both, the Furnace is effectively destroyed because it has no unit to deploy into!

Now I've thought up my own solution, and I've gotten some opinions from other event organizers, but I decided to go to the source. I called up Games Workshop Customer Service and they confirmed my thoughts. Since it can ONLY be deployed inside the Plague Monks the Plague Furnace and the monks are rolled for together. This would apply to similar units that MUST be deployed together (like a Screaming Bell if you only have 1 unit of Clan Rats or Storm Vermin, or a Slaan in a unit of Temple Guard). But, more importantly the ruling is not official so I would have to call my tournament organizer and get their ruling.