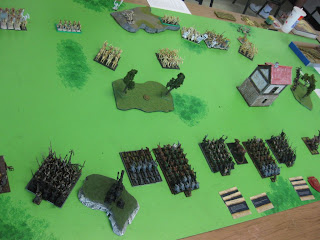 I was doing some list rewriting, playtesting, and option gauging this weekend, and I am thinking about finalizing my 'Ard Boyz list for the next round. After the first round I came away with a couple opinions of my own list. 1) I didn't need the sacrificial Warlock with the Forbidden Rod. He didn't offer much to the army. 2) The Giant Rats were good for taking up space on my flanks, but didn't contribute to any serious fights and my army almost had too many models to be fully effective. I experimented this week with Rat Ogres, but I was unhappy with them. Yes they hit hard, but they have no armor save, and 300 points for 6 Ogres (and 3 Packmasters) is too much of an investment for my liking in this environment. I am still planning on bringing them to the Fall Classic.

So here is what I am thinking about adding. 1) Plague Monks. They are taking the place of the Giant Rats again, who I originally took the Monks out for. I want to get a magic banner in their unit to get more flaming attacks in the army. I am expecting to see lots of Dark Elf players in the next round. I would prefer to give them the Storm Banner and keep flaming attacks on the Storm Vermin, but that would drop me below my minimum Core. It also gives me a place to put in my next addition and use them as a decent flank protector and support unit. 2) Plague Priest. I wanted this guy in the list as another channel die, another Plague Spell to get my Power Scroll Grey Seer 'Plague' like I plan on, and a good leader of the Plague Monks. I gave him the Warp Scroll which is very powerful if it goes off, Bound 5 doing S2 hits to every model in a single unit within 24" with no armor saves. 3) My third unit of Gutter Runners. I hated to see them go when I was toying around with Rat Ogres. These guys are outstanding for either scouting and taking away Vanguard moves and protecting my own war machines, scouting and taking out poorly deployed war machines or characters, or sneaky infiltrating and doing whatever I want.

The scenarios haven't been released yet. This takes away from my total core units in the army, but also adds another banner if there is a fortitude scenario (although I have a feeling the deployment and core missions will be the same). So here is the list as it stands. Please comment and critique.