I had been trying to find a Dwarf opponent to get some practice in before Saturday's upcoming 'Ard Boyz Semi Final round, and then I met Drew last week and set up a game for Tuesday. He was able to accommodate and bring a pretty 'Ard Dwarf list that really tested my cursed ratmen, and gave me a good game worth posting as a full battle report.

Starting off, I played my revamped 'Ard Boyz list. It included 2 Grey Seers, a Plague Priest on a Furnace, my BSB, a Warlock with a condenser, a lvl 1 Warlock with a Doomrocket, a Warlock with a MR2 amulet, 2x30 Clan Rats, 2x40 Slaves, 30 Storm Vermin, 24 Plague Monks, 2x5 Gutter Runners, 2 Hell Pit Abominations, Doomwheel, and Warp Lightning Cannon.

Drew's List was lead by Thorek and his Anvil, a Dwarf Lord with a great weapon, Bugman (the character who scouts), BSB with +2 dispel banner, another Rune Priest, big Ranger block, big Warrior block with great weapons, big Ironbreaker block, 2 units of Thunderers, 1 unit of Quarelers, 2 Cannons, a Bolt Thrower, and an Organ Gun. This gave him +4 dispel dice and +4 to dispel every turn. Tough list!

Turn 1, I activated the Storm Banner right away as the Dwarf army rolled to go first. Even with the Storm Banner up and running, the Dwarf shooting took out 10 or so Storm Vermin. The Gutter Runners closed in but didn't damage much on one side, and on the other they were an inch away from being able to shoot at Thorek. The Plague Monks get a charge on the out of position Ranger unit. Out of the gate I used the 13th Spell with the Power Scroll and smashed his Ironbreakers, killing about 2/3 of the unit. In close combat the Plague Monks roll right over the Ranger unit and overrun towards the flank. 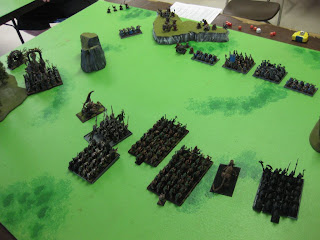 Turn 2 the Storm Banner is still up after 2 rolls, but it doesn't stop the Dwarf artillery from blowing BOTH units of Gutter Runners off the table. Again the Anvil fails to do much more than whimper. On the Skaven turn, the Storm Banner ends (to the rejoicing of the Dwarf Engineers). The left Hell Pit Abomination rolls triples and comes to a grinding halt! The Dwarf dispel is too much, and I can't cast a single spell. My WLC blasts into two war machines and the engineer, but the strength is only a 2 so I do zero damage. 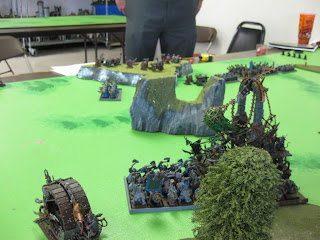 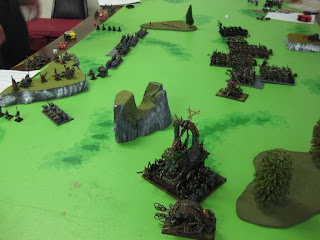 Turn 3, the Dwarf army goes on the offensive and double charges the close Hell Pit Abomination! Both charges make it. Both Dwarf Cannons make use of clear skies and unleash on the Plague Furnace. The first only rolls 1 wound after hitting, and the second rolls a 1 when trying to wound and does nothing! The Horned Rat was watching over the Furnace for sure. The Hell Pit kills 10 Dwarfs but a full squad of great weapons is too much even for its regeneration and it falls, only the unleash 2 Rat Swarms from its corpse. 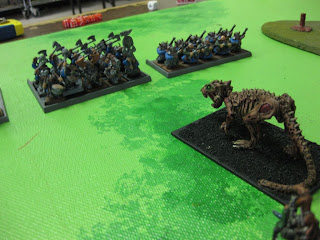 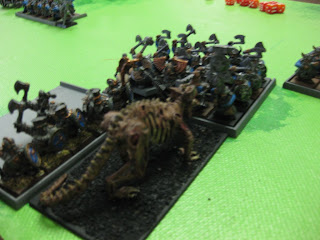 The Skaven then do their own mass of charges. The Rat Swarms make it into the Thunderers close by, a giant Slave block charges into the remaining Ironbreakers, the Doomwheel makes it into Quarrelers, but the Storm Vermin and other Slave unit fail their charges on the BSB and other Thunderers. Another Magic phase with no Skaven power. I rolled 9 power dice and the Dwarfs had 10 dispel dice! Even better, the Doomwheel misfires and does two wounds to itself, but the WLC finally kills two Bolt Thrower crew. The Doomwheel runs down the Quarrelers into a Cannon! The Slaves lose and hold steadfast whiel the Swarms hold against the Thunderers. 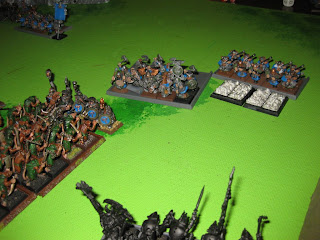 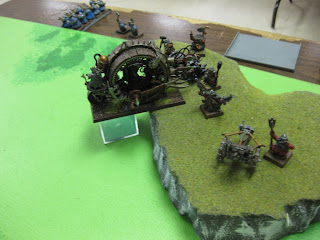 Turn 4, a single bolt finds its way into the fleshy torso of the Abomination, doing 4 wounds. The remaining free Dwarf Cannon hits the Furnace dead on, but again does only 1 wound! The Doomwheel wrecks the Cannon and the rest of the Skaven hold after losing to the rock steady Dwarfs. On the Skaven turn I unleashed another slew of charges. The Doomwheel misfires and blasts itself for 5 more wounds, and explodes amid the Dwarf warmachine line. The Hellpit only has 1 wound left, but blows through the Organ Gun into the second Cannon. The Storm Vermin try to allocate hits onto the BSB but only do one wound, lose combat, but hold with their own BSB roll. The Swarm succumbs to the Dwarf Thunderers, freeing them to shoot next turn. 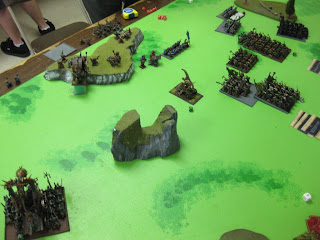 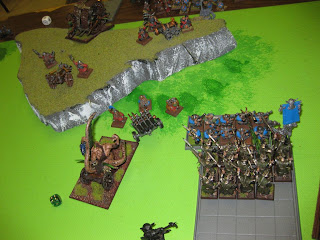 Turn 5, the Anvil goes off and kills 6 Slaves and 4 Clan Rats. The Hellpit finishes the Dwarf Cannon, but can't overrun two turns in a row. The Storm Vermin and Slaves both lose, but hold. The Skaven charge again! The Furnace makes it to the Bolt Thrower, and the Slaves flank the Thunderers. The Grey Seer General unleashes Crack's Call through the Dwarf Warrior front rank, killing every Dwarf it touches, the Runepriest, and misses the Dwarf Lord! It was the only spell successfully cast. He leaps to safety. The Storm Vermin whiff in combat and flee from the Thunderers and BSB. The Hellpit got to the Anvil this turn, does 1 wound with impact hits, 1 wound out of the 16 attacks it rolled, and 1 wound with Thunderstomp. Thorek does NO wounds back. The Furnace overruns through the Bolt Thrower and into the Engineer. 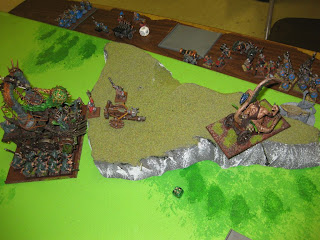 Turn 6 the Dwarf Lord declares a charge on my Grey Seer who had the power scroll, and the great Skaven leader he is, he flees from the fight! The remaining Thunderers shoot 6 shots at a lone Warlock Engineer who had yet to unleash his Doomrocket, but fail to do a single wound. The Furnace kills the lone Engineer and holds steady, and the Hell Pit Abomination does 2 wounds to Thorek, but dies to his counter attack! Thorek has ONE wound left. 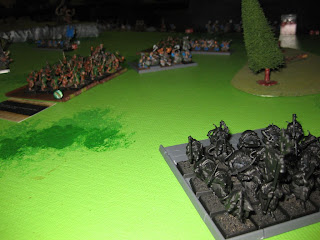 The final Skaven turn seals the fate of the Dwarf army. My fleeing units continue to flee, but do not flee off the board. I roll double sixes for my final magic phase (two turns in a row) and cast Crack's Call again, but I am 1" short of the Dwarf Lord! I still whittle the unit down in time to unleash the second and final Dreaded 13th Spell of the game. I rolled a natural 29 and the Dwarfs rolled a 27. The Dwarf Lord and his remaining faithful Dwarf Warriors and transmogrified, warped, and twisted into Clan Rats. The Plague Furnace comes rolling down the hill into Thorek and his Anvil, smashing him to a mushy pulp. The final turn of Skaven carnage earns me 964 points, for an overall massacre with a score of 2221 for Skaven, and 825 for the Dwarfs. The fleeing Storm Vermin and Clan Rats with the Grey Seer still on the board save me a lot of points. 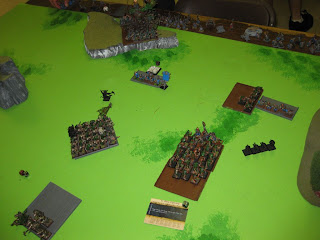 Overall it was a close game until the last turn. Drew made some mistakes, like deploying his Rangers too close and not taking any flaming runes on his Cannons. Overall he played very well and was actually very strong in dispelling most all of my spells. But the ones I did sneak in were game changers and helped support the rest of my troops to the win.
Posted by Rhellion at 6:40 PM