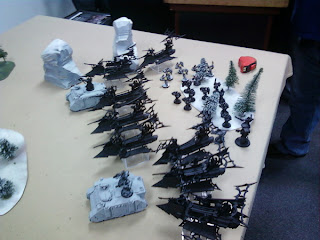 Well I'm home from the 2v2 Tournament at Shenanigans Hobby Shop, and my team came away with 1st place. My partner decided the last minute to bring his Dark Eldar, and our combined ranged superiority proved too much for our opponents. My list was a Rune Priest, 5 Wolf Guard (2 power fists, combi melta, cyclone missile termy), 5 Wolf Scouts, 2 Grey Hunter squads, and 3 Squads of missile launcher Long Fangs. My partner brought 2 Homunculus, 2 Squads of Wyches in Raiders, 5 Warrior Squads in Raiders, and 2 Ravagers. Lots of Lances.

In game 1 we faced off against Space Wolves and Blood Angels. The Wolves had 2 Rune Priests, 2 Grey Hunter squads, 2 Long Fang squads, and a Land Speeder. The Blood Angels has Mephiston, 2 Assault Squads with Priests, and a Storm Raven. We opened up the first turn and took out an entire Assault Squad and the Storm Raven in the first round of shooting. The Wolf Scouts came on turn 2 and took out a squyad of Long Fangs and we wrapped it up from there. We win 20-0 with 2315 points.

Game 2 we faced Blood Angels again and Sisters of Battle. The Sisters had 2 Exorcists, an Immolater with the HQ unit inside, and 2 Rhinos with squads. The Blood Angels had a Librarian and retinue unit in a Rhino, a Baal, a Vindicator, an Assault squad, and an Assault squad with a Priest. Our turn 1 shooting was less effective, but our numbers overwhelmed again even in the Kill Point scenario where I though we would be at a disadvantage. We win the game 16-0 with 2500 points.

Game 3 on table 1 against a double Eldar list, played by our new friends from Toledo. Their list was exceptional and they played it very well, if not a little too cautiously. In the end it could have been what won us the game, because I was aggressive with my Grey Hunters and I captured the objective on turn 5, with a lucky roll of a 1 for the game to end and give us the tournament win. The Eldar combined lists consisted of Eldrad, Maugan Ra, a large unit of Wraithguard with a warlock, a squad of 3 War Walkers with double scatter lasers, 5 Wraith Lords, 2 Dire Avenger squads, a big unit of Warp Spiders, and 2 units of 3 Jetbikes. The timely end of the game gave us a 16-0 win and no points calculated, as we were the only team to win out and with just about full battle points.


Thanks to Shenanigans for hosting, and to Eternalchaos99 (Brandon) for running the tournament. I haven't played much 40k lately and I have never played a team event, so it was an interesting experience. I also got to play 6 people I have never played 40k against before, and that is always a good thing. And thanks to my teammate Mike for sending me a text on Tuesday to ask me to be on his team. Not bad for 4 days notice!
Posted by Rhellion at 2:54 AM