What better to do when you wake up at 7am the day of the tournament, than to blog in your hotel room! Here is the final list for today. I was able to get a practice game in yesterday to get a feel for the location and what I have on the table. I have to say, the Chicago Battle Bunker is COOL. I already met a few guys I "know" from different forums on the internet and went drinking with a guy who flew in from New Orleans, so before even playing a single torunament game I am having a great time. There were a few things I need to correct for today's games, like forgetting to ring the Screaming Bell, but I am confident in my list and ready to go. Good luck to anyone else playing in the 'Ard Boyz finals today. 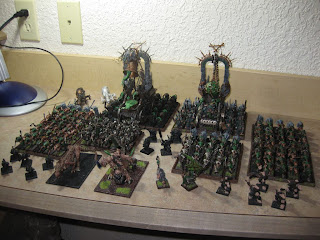