Last weekend I participated in my first Warhammer 40,000 tournament in a LONG time at Gamelinks in Fowlerville, MI. I had a lot of fun and really enjoyed my games against 3 new opponents. As you can see, I was rusty to start off and played against an army I have never seen before twice, but in the end I felt like I still was competitive through the event. 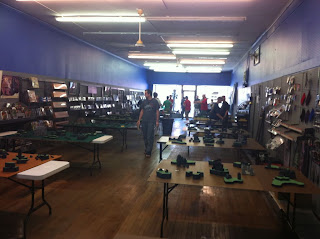 My list was a Wolf Lord on TWC, 2 Rune Priests, 3 squads of Grey Hunters in drop pods, Scouts, Lone Wolf in terminator armor with a chainfist and storm shield, Wofl Guard with fists in squads, 3 TWC, and 1 squad of missile launcher Long Fangs.

2 Dreadknights, 2 units of Troops with lots of Psycannons on foot, fast attack jump troops, and the Character with the Ghost Terminators attached along with a Librarian in terminator armor. The mission main objective was to control terrain pieces. I didn't know the rules for the Ghost Knight special character, so apparently he can deep strike turn 1 without scattering, and appeared right next to my Long Fangs. Next time I will know to definitely protect my units through deployment! This was what really hurt me early on, but I still was able to fight back. My TWC charged the fast attack jump troops, and the Lord hit, wounded, and killed on all 6 attacks. The TWC wiped the squad but took a few wounds. Their next assault, though weakened from shooting, the Lord again hit, wounded, and killed 6 on hit way to winning the combat but the squad fell back leaving my TWC to be finished off by shooting the next turn. That squad not being wiped, along with a last turn 30" jumping Dreadknight (wtf, lol) allowed my opponent to grasp 1 more terrain objective and win 30-1. I wasn't as close on the secondary objectives.

A very different game than game 1. The mission objective was to hold table quarters as well as a point on the center of the board with an HQ as a secondary objective. The Grey Knights this time has Draigo, a squad of 10 Paladins (combat squaded), a squad of 5 Paladins, and 2 squads of fast attack jump troops. Things went poorly early for my opponent. I was able to Jaws the Banner Bearer in Draigo's squad first turn, though Draigo survived. Then I assaulted second turn with the TWC, broke Draigo and what was left of his unit and follow him off the board. Then the TWC were shot and assaulted by the next Paladin squad, and I broke them and ran them off the board as well! Things were well in hand from there as I controlled the board and all of the secondary objectives for a 33-0 win.

My final game was against The Judge from Dark Future Games, and he brought a full drop pod Space Wolf list. 2 Rune Priests, 4 squads of Grey Hunters, and 2 Venerable Dreads. The game had 5 total objectives on the board, and I went first. I put most of the objectives towards one corner / half of the board so that I could focus everything in one area with my limited mobility. I had less reserves than my opponent, so the plan was to pick him off as he came in, if possible. It did end up working, even as my units took shots as the pods fell, they were the superior close combat force. My opponent and I both had Wulfen and Power Weapons in my squads, but he opted for larger squads and special weapons, or room for his terminator Rune Priests. I instead took Wolf Standards and Power Fist Wolf Guard, which made the difference in squad vs squad close up combat. That and the Thunder Wolves running everything down on one flank. I win 33-0 and have to wonder how the day would be different if I had read the Grey Knights Codex before game 1.

I had a great time overall. 40k is definitely not my strong suit, but I can still appreciate the game. I didn't take pictures of my games, but I do have some great shots of the beautiful armies on the day. have a look... 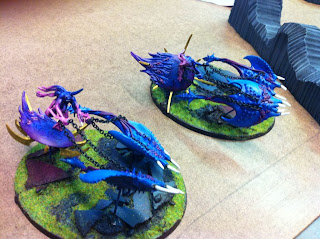 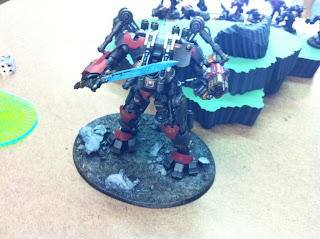 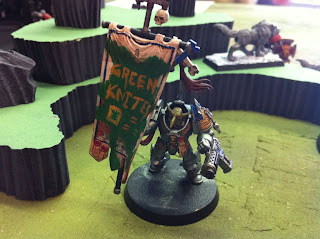 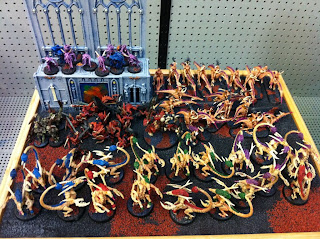 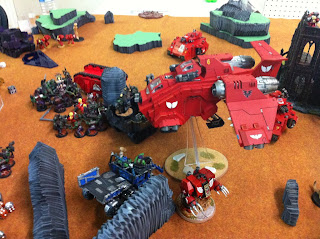 2 more great looking armies
Coming up soon will be Blood in the Sun preparation. The 2 day GT is July 9 / 10. Until then I will be taking a couple weeks off from hobbying as I am on vacation, but I will be back playtesting for BITS asap! Tomb Kings will also be back on the table AFTER BITS.
Posted by Rhellion at 8:09 AM