Preparing for a Warhammer Tournament 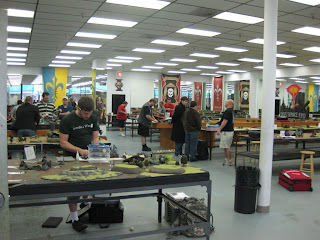 Blood in the Sun is less than a month away, and I am busy preparing for my first GT of the Summer. BITS will have 50 players, as well as 5 games over 2 days, so I can expect to face a variety of opponents as well as a variety of armies. Every army other than Ogre Kingdoms will be represented, according to sign-ups. So how do you prepare for an 8th Edition Warhammer Fantasy tournament like this with so many variables? Well lets take a look at what you need in a successful Warhammer tournament army.


Know the scoring system. Know the restrictions and composition system. Paint your models. Yes these are all important and effect how you will build your list. They will dictate how large your units may or may not be or even units that are left at home. Those are the basics. Lets get into list specifics:

Battle Standard. This may seem like a no-brainer to veterans, but in 8th Edition the BSB allows you to re-roll ALL Leadership tests. This is very important to all units within 12" of the BSB. This model is as important as your General, more so for a few armies. Some armies that are completely immune to psychology can drop this completely, but otherwise it is too good to leave at home.

Wizard Lord. It is an argued point, but I believe a level 4 is mandatory for tournaments starting at about 2200 points and above. Not only is it the best possible way to do damage in the magic phase, but it is also your best magic defense. The difference between a level 2 and a level 4 when you are able to add your wizard level to the cast and dispel rolls can win games when some spells effect the entire game every time they are cast.

Dispel Scroll. I see people leave the dispel scrolls at home, and regret it usually at least once a tournament where a game changing spell is out of reach of the dice. A dispel scroll is a saving grace once per game that I would never leave home without when I am hoping to challenge for the championship.

War Machine Hunters. You need some way to deal with war machines. There may be a devastating full gunline, or just a Skaven army with horrible Warp Lightning Cannons. Scouts, fast cavalry, specific bound spells, or anything else that can be dedicated to killing war machines. The more variable use the better. Allowing those cannons and stone throwers to lob fiery death unchallenged the entire game is to great a mistake.

Banners. Most tournaments are random scenarios or scenarios based on the ones out of the book. You NEED banners in your army for Fortitude points. At Adepticon this year I saw a game next to me end before the first turn even started. The top table game the final round ended first turn when a Bloodthirster died to a Rock Lobba. Make sure you know the breaking point and make sure your army has enough Fortitude points (the banner/standard count plus 2 for your General) to be competitive.

Flaming Attacks. There are monsters out there that are so devastating, you HAVE to prepare for them. Hell Pit Abominations and Hydras have regeneration, and are vulnerable to flaming attacks. It is worth taking the 10 point Banner of Eternal Flame on unit that can be dedicated to fighting these monsters.

Monster Killers. Also adding on the above, not all monsters are vulnerable to flaming attacks, and you need a way to deal with them. War machines of your own are the first choice, but poison attacks are another great choice. Magic Lores are part of list building now as well, so maybe you can fall back on a specific spell... but only do this with more than one Wizard and can garauntee a certain spell that you need. Examples include Crack's Call, Gateway, Dweller's Below, or Mindrazor. Depending on your build, mass shooting may work. Just plan for them.

Chaff and/or tar pits. When facing off against a giant "Death Star" unit of 40 Chosen or 50 Ghouls or some other giant unit of very killy troops you need to deal with them. A large, expendable unit that can hold them up with Steadfast is great. Another option is many small, expendable, cheap units that can redirect and keep in the large unit's way for most of the game. Maybe fast cavalry, lone beasts, etc. These small and expendable units are also good for extra deployments.

A 20 man core unit. For some armies this is easy. Almost automatic. But for large horde armies it may be worth bringing one Core unit of a max 20 men to be placed in the Watchtower for the 6th BRB Pitched Battle scenario: "Watchtower". You may not feel this is necessary if you want to attempt to take the tower with a much larger unit later, but it is worth considering for a tournament list with variable scenarios.

And there we have it. I think these are some of the basics that need to be in EVERY tournament army. That's not to say I think all armies should be the same. Not at all. But you need to be able to deal with all of the terrible things out there you will see at the top tables of a quality tournament. Some units may fill more than one of these rolls. The more versatile the better!

Are there any other must have elements to a tournament list I may have forgotten? Post them below. See you on the battlefield!!!
Posted by Rhellion at 7:40 AM