I have claimed in the past that Warriors are a good match up for me to face with my Skaven. This weekend my claim was definitely put to the test. I had a quality game vs a Warriors of Chaos opponent up at the Hampton Village (Rochester) GW Hobby Center. His list was a definite "Chosen Star" list. 2 weeks from Blood in the Sun, I needed to crank out the practice games vs some tough lists! 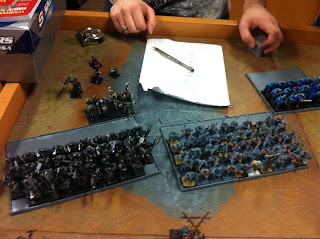 The scenario was Blood and Glory. We decided breaking your opponent first would yield 500 additional victory points. As expected, the Chosen were pretty much set up in the middle of the board with the Marauders and pushed forward. I set up my Monks opposite of the Marauders, and all the Slaves opposite of the Chosen. I spent the first 2 turns maneuvering the Slaves to keep the Chosen busy for as long as possible. The Chosen rolled +1 Toughness for their starting ability. 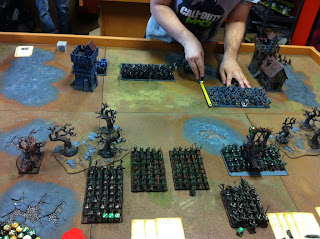 After his Marauders moved up, I attempted to charge first turn and failed. My Abom advanced on his Tzeentch Warriors in the building, not liking the level 2 Death Mage looming over my entire army. Second turn the Marauders charged into the Plague Monks, and the Chosen went into the first Slave speed bump. Not sure why, but this just bought me some more time. The Death mage cast a small Purple Sun towards my Hell Pit that misfired and killed a couple Warriors before scattering away. 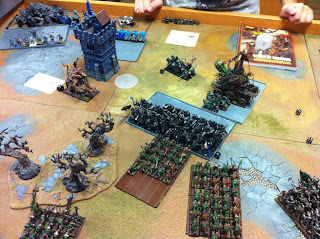 I thought things were going pretty well at this point, until the next turn when my opponent rolled the dreaded 11 on his Chosen roll, then modified it to be a 12 for a 3+ ward save with Stubborn. My Plague Furnace broke the War Shrine in combat and failed to catch it, but it ran through the now rallied Tzeenth Warriors... causing them to flee off the board. I eventual did catch and destroy it, all the while the unkillable Chosen with the L4 Tz caster and BSB inside were grinding through rats.

I fed all of my slaves to the unit and maneuvered my Storm Vermin around the rear of the Chosen. Not to charge, but for my Grey Seers and BSB to bail out on my turn 5, and then align my remaining 'heroic' Clan Rats in front of the Chosen. They held out until the end of the game, and the giant Chosen point sink was all that remained (it cost 817 points without the characters!).

I won by a solid 620 points or so and felt confident that my game plan vs such a unit worked out to my own satisfaction. All I lost in the mass carnage were 2 Slave units and a Warlock Engineer. Looking back the only thing I would have charged was having the Engineer hop out of his unit early to be an additional speed bump for the Chosen. I didn't post any real magic updates, as it was a nonfactor for almost the entire game. Also, neither of us broke from the scenario rules.
Posted by Rhellion at 1:06 PM