I decided an army of another 250 models painted green was not in my future, and sold the lot to buy a brand spanking new Tomb King army. First off, I think the book is a solid choice, but definitely not the top in the power rankings. The models and theme of the army are really what draw me in. I have started modeling them up and got my first game in with them, so here they are. I am trying to create a slab / tile ruins with the bases and unit fillers. There are more to come soon. 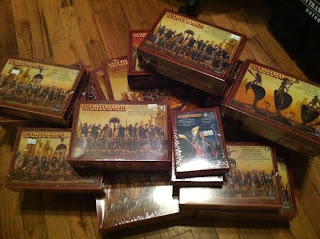 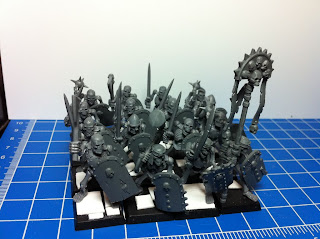 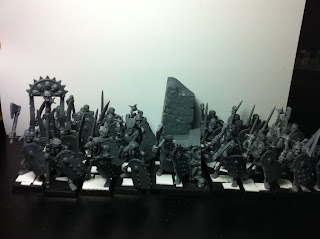 Some examples of the unit fillers in my first horde of Skeletons. 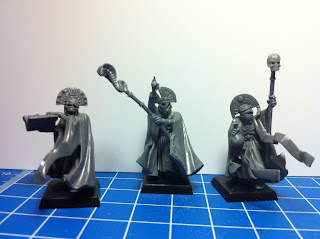 I used Empire Wizards with minor conversions and Tomb Guard heads as my Liche Priests. 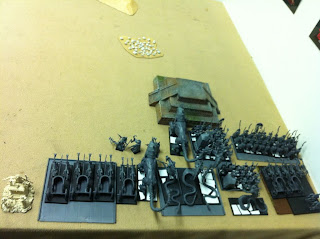 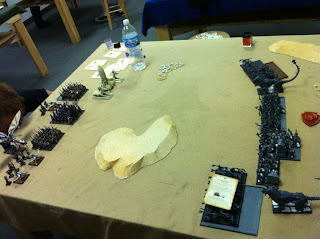 Assembled for the inaugural battle vs High Elves.
In their first game against the High Elves, I faced off against a Book of Hoeth list with Life and Dwellers. Also perfectly wrong was the scenario: Battle for the Pass. My opponent was content to move in range to cast Dwellers and kill my Heirophant on turn 3, then continue to move backwards and shoot me as I advanced. Unable to move in the magic phase any longer, it was a snail pace.

The Casket was able to do some serious damage to his war machines mid game, and I was able to kill the Fire mage off the dragon in time for the Sepulchral Stalkers to come from below and finish the dragon off by gazing him to dust. My strong unit of Tomb Guard spent the whole game moving but also not losing any models with the help of their Banner of the Undying Legion. On the last turn the 2 Warsphynx's got into combat and wracked up heavy casualties, but were unable to break their opponents. Charging Chariots killed the High Elf Mage Lord, and a Sphynx killed another level 2 mage. My opponent was unable to completely hold me off and I earned the Draw in the end (losing by only 20 victory points).
I was pretty satisfied that I was able to pull the Draw with SO MUCH stacked against me in the game. I think there may be some life in these corpses yet, unlike what the internet says is inevitably a terrible book.

I am going to get to work on this guys very soon. I need to come up with a paint scheme. I am thinking red and black, with gold accents (well lots and lots of gold).
Posted by Rhellion at 12:22 PM