A few weeks ago I played int he GLWL Invitational. It is the season-ending tournament for the Great Lakes Warhammer League. I was in the tournament rather than the division winner's bracket, so I was playing for the Tournament Championship instead of the League Championship. The tournament used the GLWL Comp set, which included MR ward saves vs all spells, 12 die power cap on magic phases, no special characters, no power scroll, no double rare, etc. When the dust cleared I had won the overall award with the Tournament Championship sword.

I had three great and tough opponents. My first was Eric Stephens and his Dark Elves. Cauldron, Hydra, L4 Shadow, L1 Fire, and the rest. An early Crack's Call put me ahead and I ground out his army that was without their Cauldron for the rest of the game. 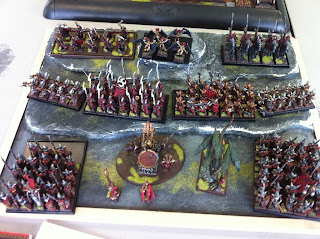 My second game was against Darrel Brown's tough Warriors of Chaos. I heavily disrupted Darrel's strategy the first turn with my hail of fire and magic that nearly wiped out a full squad of 40 Marauders on turn 1 with focused fire. The Doomrocket massacred a lot of Marauders. From there I was able to focus on smaller units one at a time as they advanced towards my horde. 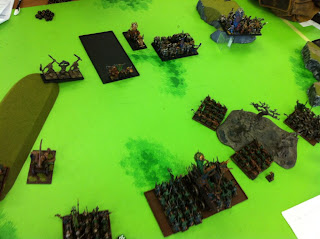 In the final game I faced off again vs Mike Hernadez's Lizardmen. I played a very defensive game vs the Lizardmen and tried to do as much damage as I could before they got to me. A combination of target selection and luck allowed me to take out the Skink / Krox unit early (choosing to use Crack's Call vs the dangerous Krox in the unit), and a serious pounding of the Plague Monk horde through a unit of Saurus in a single turn led me to the minor victory. 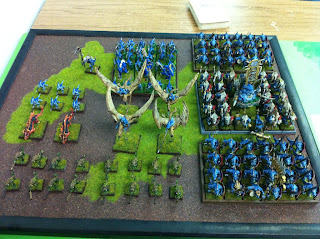 Overall I was undefeated in the tournament, had solid painting scores, and very good sports scores, and took home another excellent sword trophy for Overall Champion. Next up is Ard Boyz TODAY. Look for my tweets on Twitter @Rhellion and come back for a battle report in the coming week.

PS: Another tournament without using the 13th Spell. I think I will have to change that today at Ard Boyz. 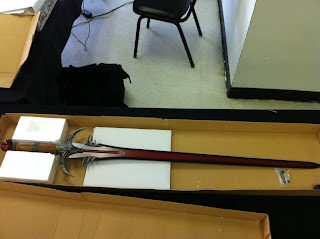