If you've been following me on Twitter, you'll know I have been busy with the hobby, and not with my Skaven. Well I still have another 40 Skavenslaves to paint for Adepticon, but I have been spending a lot of time putting my new Ogre army together! Here is the basic list I have together that I played my first game with this weekend.

I have everything assembled, and I am looking forward to getting to work on it very soon, as soon as those pesky Slaves are painted! Maybe I will even have them done in time for Blood in the Sun!

Speaking of Ogre Kingdoms, my next GLWL is against the Ogres this Thursday. Until then, take a look at my converted Slaughtermaster. He is supposed to be wearing Glittering Scales and has the Fencer's Blades, so I wanted him modeled appropriately. 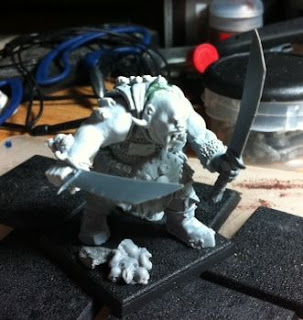