My third game of this year's Great Lakes Warhammer League was against the powerful Ogre Kingdoms, and I was not entirely sure what to expect. Because of the league comp I know that I would be facing a maximum of 1 Ironblaster but could possibly be facing 3 units of Mournfang, so I made my list accordingly. 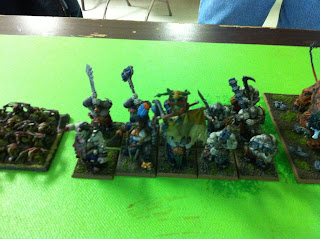 Things got off to a poor start for the Skaven, who rolled the first turn. I was able to get a Skitterleap off and get my Brass Orb Warlock right behind the Stoenhorn, and position him so that he would hit the Stonehorn and 3 Ironguts if I hit, and the Stoenhorn even if I missfired. I rolled a hit! The Stonehorn then passed his Initiative test, though I did pick off 3 Ironguts. My cannons were quiet the first turn, missing their marks. After the Stoenhorn disappointment, I was sure luck was against me as the Hell Pit and Doomwheel were both charged on the first Ogre turn by long rolls from the Mournfang on the left and and Stonehorn on the right. 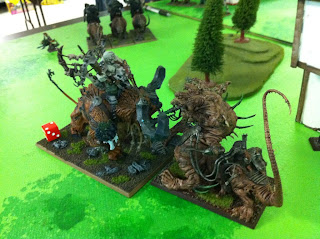 In the magic phase, I was able to hold off the Death snipes vs my Plague Furnace, which would be key to me winning the game. The Leadbelchers lined up the rain down on my Storm Vermin, and rolled 4 1's for their shots! In combat, my Doomwheel was defeated but my opponent chose not to chase me because of my 3d6 move, and because he didn't want to leave his flank open. My HPA took some serious damage after also only rolling 1 S6 hit that had its wounds dealth halved. 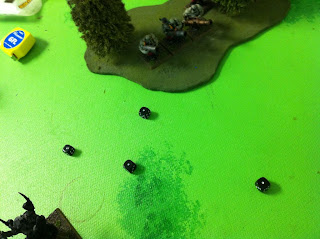 On the next turn, the game shifted dramatically. My Plague Monk horde slammed into one of the smaller Ogre units, and my cannons started lighting it up. It also helped that my Doomwheel rallied and turned to face the Mournfang now in their flank. I was able to shoot and take out 2 Mounrfang on the left, and another from the right unit. Magic was less effective as my Crack's Call is dispeled on double 6's, but the Plague Monks break and run down the Ogres and the Hell Pit's avalanch of flesh kill off the Stonehorn. 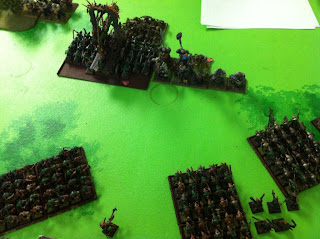 In the next turns I am able to flank charge the remaining left Mournfang unit with the Doomwheel and blast it off the table while the right unit is sniped by Warp Lightning. The Plague Monks slowly grind away on Gnoblars and the Ogres who flanked them the next turn, using Gnoblars as combat resolution needed to defeat and break the Ogres, running them down. The remaining Ironguts charge into my Clan Rats as I have set up a log jam for them and they sit there happy with their steadfast rolls. 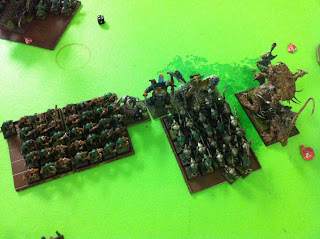 I was able to hold this for another turn as my Grey Seer shot Crack's Call into the Ironguts and narrowly miss the Tyrant. They ground down Clan Rats and Slaves and I decide to bring in the Hell Pit to try and finish them off, which is risky. The HPA's impact hits kills the Irongut, but then the Tyrant finished his remaining wounds off. He then gets back up with 6 wounds on the last turn! This saves me his points lost, but does not give me the Tyrant as he is now the only Ogre model remaining on the table... with me only having lost a single Warp Lightning Cannon to a misfire. 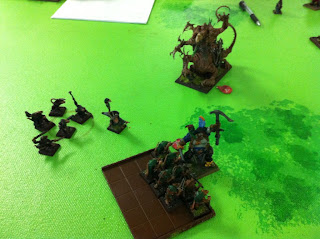 Lots of key leadership tests and rallying, and taking out the Mournfang were the key to me winning this game. Every unit that broke on my side did not get caught, and eventually rallied. Every unit that broke for the Ogres was run down. My cannons were hot, and if they had not been having Mournfang in my flanks would have been a nightmare. I take away the big 2389 vs 265 win and advance to 3-0 in the 2012 GLWL.

Next up, Empire and then Dark Elves to finish up the league.
Posted by Rhellion at 7:48 AM