Game 4 was what I figured would be my toughest challenge in this year's GLWL, last year's Division Winner Nik Rodorigo. This year Nik brought a tough Dark Elf list that looked like the following: 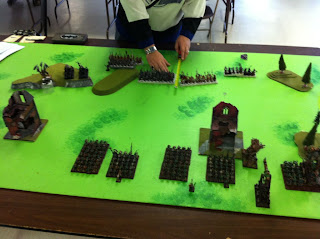 We rolled up our deployment with Dawn Attack. Nik deployed first and much of his power was deployed on my left flank with the rest of the bulk in the middle of the field. A pretty solid deployment which is lucky for Dawn Attack. My force was then deployed very similarly, which allowed me to start away from his Hydra and chariots, which I thought was perfect for my plan to magic him until he got close enough to engage.

And magic him I did. I was able to stop early shooting with the Storm Banner and keep the death magic off my Abomination first turn. This allowed me to start in with my own magic. Nik made the mistake of not using his scroll early on Plague and failed his dispel roll. Plague ripped through the Dark Elves and decimated their line first turn. This is a best case scenario for my army, because I love softening up vulnerable elite units to smash with my strengths later in the game. 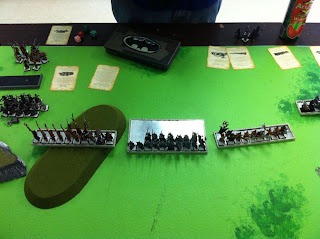 From there on out I was able to really commit to punching forward, though I did my best of avoiding and blocking up my left flank. I didn't want those chariots and hydra wrecking my flank. My cannon made a solid shot and sniped one chariot and put wounds on the other. My Warlock with the orb got sniped early so I didn't get to use him against the hydra, but another cannon shot put 4 wounds on the hydra to make him severely weaker. 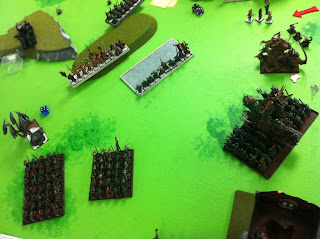 Now the Plague Furnace was clear of the woods and building and rumbling towards the DE lines. With the Furnace and HPA running free, and his level 4 bailing out to try and flee, I was able to roll over the rest of the army for the easy win at this point. It would have been a tougher game if that first turn Plague had been dispelled, but I got the big win and move on to 4-0 in the 2012 GLWL.

Next up will be my final report of the season against Empire. 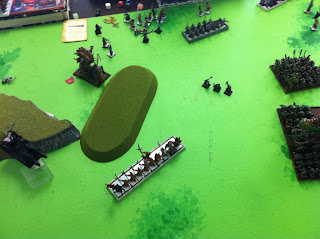