My final game of the 2012 GLWL was against the Empire, with an artillery capped list. It was more of a 7th edition style list with small units and detachment support, but I would still have to survive the salvo of war machines as I crossed the table. We rolled up Meeting Engagement and my opponent would deploy and go first, so he definitely would maximize the amount of shooting he would hit me with. 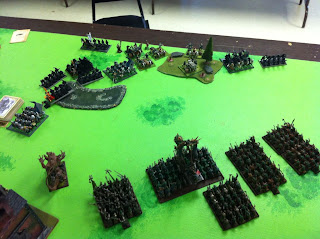 The Empire set up behind swamps and forests and told me to come get some. Even with the storm banner up he was able to roll 4+ to shoot all his artillery both of the first turns. It did at least slow his small arms fire from chewing me up. First turn the Fire Wizard threw 6 dice at a large Fireball and managed to put 4 wounds on the Hell Pit Abomination straight away. A cannonball went through the Plague Furnace, killing the Priest and putting 2 wounds on the Furnace itself (luckily for me it was only 2).

I marched forward as quickly as possible and Skitterleaped my second Grey Seer to 6 dice Crack's Call at his mass of war machines. When I didn't get the double 6 I was hoping for I lost Crack's Call to seal of destruction, and now had less tools against the cannon that would be facing down my Furnace next turn.

But instead, the cannon turned to grape shot the Grey Seer, leaving my Furnace free to advance upon the Empire Lines. This also managed to NOT kill my lone Grey Seer, who had no saves of any kind. 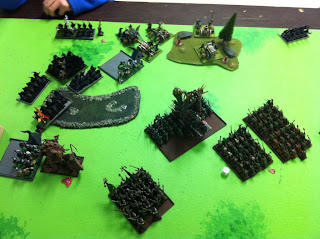 From here out I was able to get the Abomination into the unit on the left as the Furnace aimed towards the artillery on the right.Plague did its job and I was able to weaken the Empire lines as I trudged forward. A Doomrocket blast panicked the Great Swords off the board, as they were well away from the General and BSB. They were the serious threat to my flank as I went up the middle, and with them gona the Skaven heavy hitters had free reign.

With 1 wound left the Hell Pit chewed through 3 units, halberdiers and 2 detachments of shooters (including the Fire mage) before succumbing to dangerous terrain and finally dying. The furnace recieved a charge from the weakened swordsmen and Empire General gladly, and broke and ran them down. From there it popped war machine after war machine, leaving the Empire line crippled. 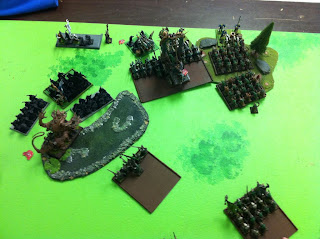 I finished off the rest of the Empire that I could and picked up a very solid win. I definitely think it could have gone differently if the Empire had stayed focused on my big targets in the beginning. The fact that the Furnace survived while my opponent passed his Storm Banner rolls is luck and poor target choice. The HPA just does what he does, killing 3 units while having only 1 wound remaining. The majority of my units that were left were shells as well. If the Empire could have finished off all of what was left with less than 10 models, I may have lost as much as I won by.

The big 2437 point win puts me at 5-0 in the GLWL and sitting on top of the current pile. The final 8 for the Championship bracket will all also probably be big winners. Now I sit and wait and see if I earn a place in the top 8 and get a chance for the league championship.
Posted by Rhellion at 11:03 AM