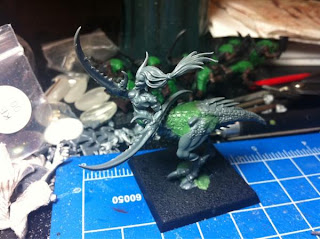 I finished work on Fiend number 2 for the Daemon army last night. I like the look of it much better. We're hoping to play our first big game this Thursday at 2000points. Look for pictures and updates on Twitter. We're sort of cheating by skipping ahead and playing bigger games. I guess it's not a true Tale of Two Gamers, but we don't care. We want to get as much practice in actually playing as possible.


Preliminary results are in for the Wayne division of the 2012 GLWL. Mike and I both went 5-0 after not playing each other this year within the division. He scored more victory points than I did overall (with the help of a couple scenario bonuses) so he will be representing the Wayne division in the league championship bracket. This means I will get a shot at defending my tournament championship from last year, and I will be bringing the Ogres! He deserves it after I nicked a win from him in the Gamers Sanctuary Adepticon Primer (last weekend) on table 1 round 3 for the tournament overall win.... my hot dice stole the game for sure.

This also means I have 2500 points of Ogres to paint in a month! Three color standard is a minimum to score some painting points, but I am hoping to also at least get them washed and based. Furious basing and priming begins today at 3:00pm!!!
Posted by Rhellion at 9:04 AM