So as I stated in the last update, my Wife is starting up a Daemons of Chaos army for Warhammer Fantasy. We bit the bullet last Thursday and picked up all the models for her 2400 point army and started building. Along the way, I started putting together some conversions to add a little unique flair to the army, while she was feverishly assembling Bloodletters. For Furies, I decided to use Ungor and Gargoyle wings from the 40k kit. After looking online and getting Twitter feedback, I bumped these up to Gor with Gargoyle wings. For the Fiends of Slaanesh I really wanted something unique and eye catching... and cheaper than $23 metal models. After seeing a similar idea on the Daemon forum, I decided to use Seekers of Slaanesh as the base for the "Centaurs of Slaanesh" Fiends. The idea was the body below the waist as a Seeker, sleek and fast... and the upper body of a Daemonette with the huge champion claws from the Seeker and Daemonette kit. Have a look for #miniaturemonday. 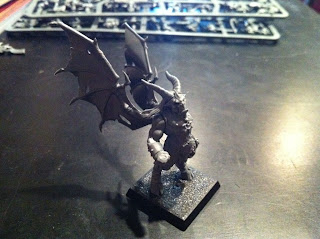 The first of the Furies was looking a little static, so I added some dynamic poses the 3 of the remaining 4 in the first unit. 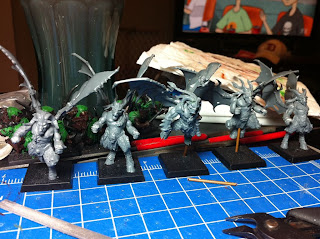 Very simple, yet effective conversions. Next up was a little more advanced, for me. 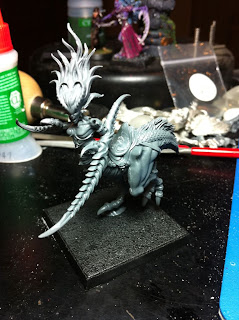 The first version of the Fiend. I posted up to Twitter and got some feedback that I needed to get rid of the saddle. I agreed. That would mean I would need to do some Greenstuff work though, which I have never really done. 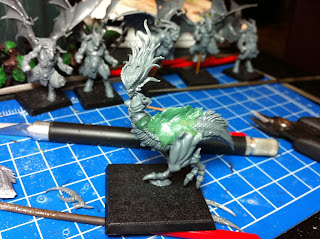 Back to the planning stages. Here is my first layer. I tried to smooth it out and make it as easy as possible to make look good later. 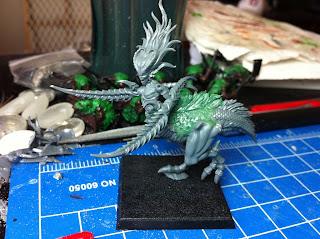 After the greenstuff work and reassembly of the claws, I am very happy with the results. The remaining 3 in the unit have less difficult skin/scale patterns and hair. It was also MUCH easier shaving the saddles before assembling the model. I am more confident the remaining 3 Fiends will look better.

We also picked up a steal in the used bin. After making sure it was what she wanted, I grabbed a used Greater War Demon from Ultraforge Miniatures to use as the Bloodthirster... for only $20! The little paint on the model is very thin, so I don't have any problems painting over it, rather than trying to strip such a large model. 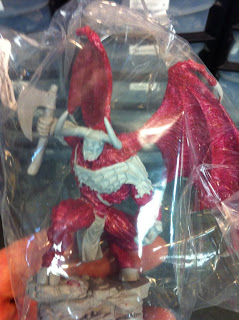 I also picked up my Battlefoam 720 that arrived this week. This is my Ogre army's case, and also came with a custome tray that fits 4 Mournfang and 2 Ironblasters. 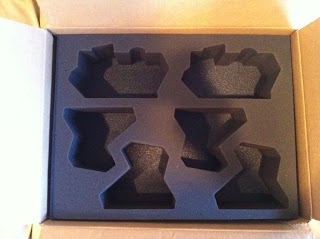