I actually played my 5th game second for the GLWL. Order doesn't matter so long as you get all your games in. This time I was playing Steve's Lizardmen. I changed my list up slightly from the last game to include a Warp Lightning Cannon for the possibility of facing Stegadons and one less Warlock, but otherwise my list was similar to last game. This will be a short report... 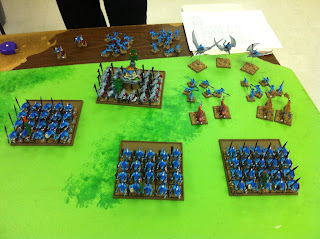 Steve's army was very Saurus heavy, with Light magic to buff them up to be combat powerhouses. Typical unit of Salamanders but what I didn't expect was the unit of Razordons. A few units of Skink Skirmishers I would have to deal with and some Terradons rounded out the list. Based on his fixed list and not having any other casters in his army, I knew Steve didn't have a dispel scroll, and he did not have Codgitation on his Slaan. This meant I would have a strong magic game. 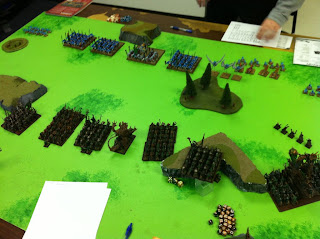 I set up with my core towards the center and spread my magic out. He lined up heavy to my left with Saurus so I tried to deploy my strength to my right and wheel into his weak side through his support units. This sort of worked out as planned but I do think I could have deployed better.

Starting quickly things went down hill for Steve. First turn I put a Plague on the Temple Guard to weaken them for further magic. Normally this would be a few casualties, but rolls were on my side and half the Temple Guard were lost. As we advanced towards each other on the second turn, I got a combo charge that saw my HPA and Slaves both in combat against one unit of Saurus (giving the HPA the much needed rank support). I did this by maximizing the charge with my slaves and still leaving the corner of the front arc open so that my HPA could get in there.

On this turn the magic flowed freely as well. Another Plague forced my opponent to use the majority of his dispel dice to stop it. This left me open to cast and succeed with the 13th Spell on his Templ Guard, destroying them. I was ONE short of also taking out the Slaan with the spell.

In combat the Hell Pit and Slaves beat, broke, and ran down the Saurus. This left my opponents two main blocks defeated and the entire center of his army crumbled, with his Slaan out in the open. My opponent took a look at the battlefield at this point, and conceded the game. 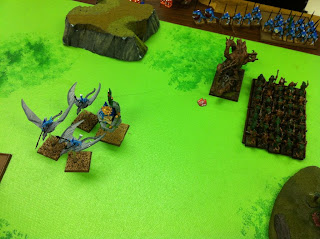 Next up I have Ogres, then Empire and Dark Elves to finish out my season.


I was hoping to also have a tournament report with my new Ogre army, but there wasn't enough to hold this month's Gamers Sanctuary 2500 point event. Next month though I am attending 2 Adepticon Primers here in Michigan. March 3rd at Gamers Sanctuary in Flint, and March 4th at The Game Room in Saginaw.

I still have 40 Slaves to paint for Adepticon, but look for more pictures and posts about the Ogres soon! They just might make an appearance at Blood in the Sun this year.
Posted by Rhellion at 10:23 AM